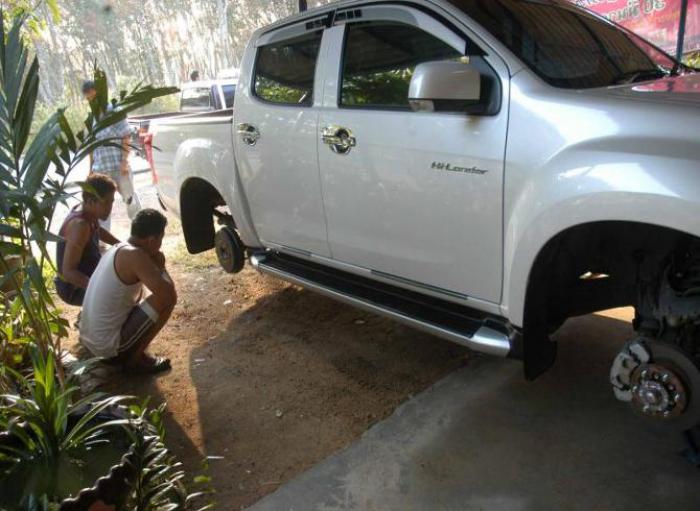 PHUKET: Despite extreme measures taken to ensure the safety of his vehicle, a man woke up to his pickup truck “hovering” above the ground – without wheels.

“I woke up at about 9am and was shocked to find my truck floating in the air with no wheels,” said 54-year-old Bumroong Sri-on at his house in Hat Yai, about 220 miles from Phuket.

“I parked my truck in front of the house the night before and engaged all the anti-theft devices, which lock up the steering wheel and the gears. I also set the burglar alarm in the car.”

Though Mr Bumroong employed a plethora of methods to protect his property – including chaining his truck to his house – thieves made off with all his wheels, except the spare on the underside of the truck.

The spare was saved due to an undersized and under-equipped jack.

“The spare wheel was still here because the jack was too short to lift the truck up high enough for the thieves to get to it,” Mr Bumroong said.

“I never thought this would happen to me. I did everything I could to prevent the vehicle from being stolen,” Mr Bumroong said.

The four wheels for the Isuzu Hi-lander cost Mr Bumroong about 30,000 baht.

“We believe two thieves worked together to steal the wheels,” said Sornpetch Tantiamornchaikul of the Hat Yai Police.

“Nobody has any idea of when they did it. It must have been when the owners and neighbors were all asleep.”