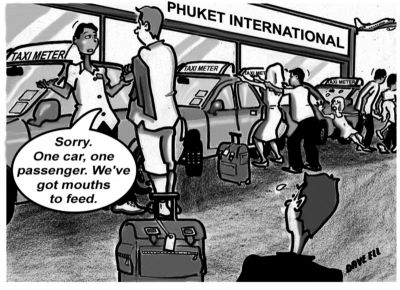 PHUKET: The compromise agreement ending the latest dispute between rival taxi concessionaires at Phuket International Airport (PIA) may appease both sides in the short term, but allowing 60 more vans and ‘limousine’ taxis onto airport grounds as the low season sets in will only worsen conditions at the airport in upcoming months.

Airports of Thailand (AOT), which runs the airport, has come under increased scrutiny in recent months for the high rates it charges Phuket Airport Limousine and Business Cooperative Ltd (PBC) and Phuket Mai Khao Sakoo (PMK) for the right to run booking counters inside the arrivals terminal and pick up fares outside the doors.

A public company majority owned by the Ministry of Finance, AOT collects over 2.2 million baht monthly from PBC and PMK and rakes in a bit more from the the Airport Metered Taxi Association, which is allowed to operate its fleet from the parking lot.

Ultimately paying for the unnecessary additional vehicles are Phuket’s tourists, and, to a lesser extent, local residents, to whom the taxi operators pass on the concession fees in the form of higher fares, already the highest in Thailand.

AOT does have big plans for the airport, but as a public company with virtually no competition it enjoys a wide variety of golden revenue streams unimaginable in the private sector.

According to the AOT website, the company and its subsidiaries reported total operating revenues of over 6.2 billion baht for the first quarter of fiscal 2010 alone, an increase of more than 20 percent over the same period last year.

Given these figures and the fact that AOT is a public company – majority owned by the people of Thailand – it should consider the sizable negative impact its concession fees are having on the (tourism-based) Phuket economy as a whole.

First impressions are important in tourism, and there is nothing more off-putting to the first-time tourist than the shouts and furtive mumblings of hordes of touts in a desperate bid for business.

Sadly, AOT’s decision to add even more vehicles – 30  vans and 30 limousine taxis – will only add to the touts’ numbers as well, further worsening congestion in both the arrivals hall and the parking lot – while doing nothing to bring down fares to reasonable, free-market rates.

AOT’s current expansion plan for PIA, with 5.8 billion baht in Cabinet-approved funding in 2009, aims to expand capacity from 6.5 million to 12.5 million passengers annually.

This is an ambitious figure that will only be attained if AOT plays an important role in helping to ensure that a holiday in Phuket is a positive, value-for-money experience that visitors will want to repeat – and not just an institutionalized ripoff.