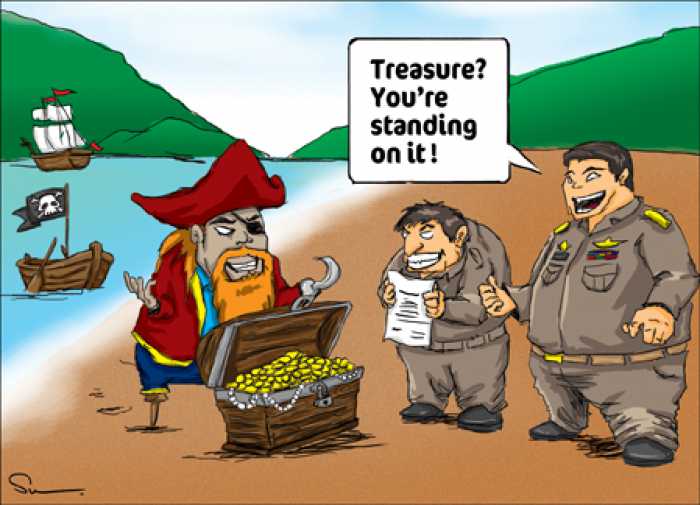 PHUKET: The arrest of Karon Mayor Tawee Tongcham and subsequent revelations about the nature and scale of the “beach rental” concession rackets along Phuket’s west coast is just the latest in a stunning series of graft-busting power punches made by the National Council for Peace and Order (NCPO) since it took power on May 22.

One of the most remarkable aspects of the case is the way in which the Kata-Karon Municipality and other local administrative bodies were able to set up and run these lucrative monopolies for so long with no legal precedent, or so it is now alleged.

It is understood, of course, that the alleged illegitimacy of these concessions will ultimately have to be confirmed by an Administrative Court ruling.

In contrast, it was always understood that the taxi cartels carved out their territories and maintained their tourism-killing tactics through a combination of collusion and intimidation. That they were operating illegally was never in doubt.

It was equally well understood that these cartels needed to work hand-in-glove with local municipalities through a system of payoffs to maintain that lucrative status quo.

That corruption has been rampant in these administrative bodies for years comes as no surprise, but the fact that officials had been able to operate illegal rackets on public beaches with no formal questioning of their legitimacy, comes as a real bombshell.

If and when such confirmation is made, we hope that those found guilty face punishment that includes lengthy prison sentences and seizure of personal assets, with the seized funds hopefully earmarked to address the myriad of negative consequences their greed has created.

This would also make it clear that Phuket’s beaches are truly public and that any encroachment upon them is illegal – even if it is being orchestrated by the very organizations that are meant to protect them.

Looking forward, we have to admit that a reasonable number of sensibly-priced beach chairs and umbrellas will need to be ready for tourists to rent by the high season, which begins next month.

The NCPO should work closely with stakeholders such as the recently-revived Phuket Hotels Association to ensure that this is done in a transparent way that maximizes tourist enjoyment and safety, while minimizing damage to what is left of our natural coastal environment.

Opinion: Hooters or bust? Tourists should be handled more delicately

Living the life of Riley in Phuket