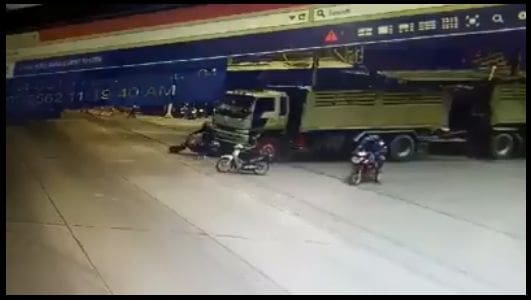 A motorbike driver has survived after a truck trailer ran over him and his motorbike at traffic lights in Nakhon Nayok, just north-east of Bangkok, yesterday.

Daily News reports that the motorbike driver had stopped at the traffic light, waling just in front of the truck. The truck driver apparently was unable to see the motorbike.

When the traffic light turned green, the truck started to move where the truck ran over the motorbike and the motorcyclist disappeared under the truck as it proceeded.  The motorbike driver managed to roll himself to safety and only sustained minor injuries.

Baan Na Police told Daily News Online that motorbike drivers are being warned to avoid stopping in front of trucks at traffic lights. It’s not known who will pay for the repair of the motorbike.