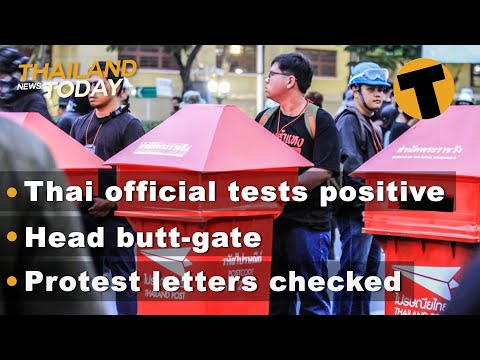 A Hungarian diplomat who lives in Thailand has recently tested positive for Covid-19 in an apparent local transmission.

The 53 year old diplomat had been in close contact with Hungarian Foreign Minister who tested positive for Covid-19 during a visit to Bangkok last week. He arrived in Bangkok, on his way back from Pnom Phenh, and left the following day after his diagnosis. The CCSA says the diplomat is currently asymptomatic and was admitted to the Infectious Diseases Institute in Nonthaburi for monitoring.

In addition to a woman testing positive in Koh Samui, weeks after she’d arrived from France and completed her 14 day quarantine, an asymptomatic Indian man tested positive in Krabi over the weekend, despite having no recent international travel history. Tests are being carried out on 19 people who had close contact with the man, with 32 other contacts isolated.

3 new Covid-19 cases were detected in quarantine over the past 24 hours. The total number of confirmed Covid-19 cases is raised to 3,844 with 3,670 recoveries and 60 deaths. 114 people are currently receiving medical treatment for the coronavirus.

A follow up to yesterday’s sad incident with a Thai protester ending up head-butting a 52 year old Russian man who was watching a small protest on the Jomtien foreshore with his 10 year old daughter and Thai wife.

The incident happened on Monday evening.

The protester, Narathiwat Khamma, was addressing a small audience when the Russian man strolled along and started listening.

This explanation from Ken wasn’t captured in the original Pattaya News video.

Naritawat was escorted to the Pattaya Beach Soi 9 police station, detained and later put on a 10,000 baht bail, pending a future court appearance.

The Russian was sent to a hospital for treatment to his bloodied forehead and nose.

Police in Bangkok say they will be reading the contents of 4 red letter boxes containing petitions and letters from a rally in the capital on Sunday in order to decide whether or not to press charges.

Pro-democracy protesters used the letter boxes to drop hand-written petitions and letters calling for reform of the Monarchy. The letters were addressed to HM The King.

The red boxes were left with police after authorities blocked activists from marching to the Palace’s Household Bureau to deliver the letters personally to the Palace.

Police say they will decide whether to charge the protesters depending on the contents of the letters. The police chief also defended the police’s use of water cannons, saying they were only deployed after officers issued a warning for protesters to stay back, and were not aimed directly at people (which is a mis-statement as evidenced in several videos).

Police say Sunday’s protest violated a restriction on mass gatherings, and those involved did not seek permission in advance of holding the rally.

Parents of children abused by teachers at the Sarasas school in Nonthaburi, just out of Bangkok, are seeking compensation.

A lawyer representing the parents says that a group of 20 parents are seeking more than 120 million baht in damages.

Reports of alleged abuse at the Sarasas private school stemmed from incidents caught on classroom surveillance camera footage showing a 30 year old teacher abusing kindergarten students. Videos of Kru Jum pushing a student to the floor and dragging another across the classroom were shared on social media. The court sentenced the kindergarten teacher to 7 months in jail.

Another nursery teacher at the school was sentenced to 45 days in jail after she was caught on camera putting a black garbage bag on a student’s head and pulling it down to cover his entire body.

4 other teachers at the Sarasas school also got short jail sentences – around 15 to 75 days  – for assaulting kindergarten students by banging their heads on the desks, pushing them to the floor and twisting their ears.

Thailand’s Army chief has described the chances of another coup as, “less than zero”, insisting the current political unrest can only be solved by political means.

Pro-democracy activists continue to put pressure on the government, repeating their demands for the resignation of PM Prayut Chan-o-cha, a constitution re-write and reform of the role of the country’s revered Monarchy.

Addressing reporters yesterday, the Army commander insisted a coup was not a possibility. Despite the army chief’s denial, with the government continuing to ignore protesters’ demands, rumours of a coup continue to spread online. Some point to the fact that the current PM gave the same assurances when he was army chief back in 2014, just months before the military went on to stage a coup and install him as PM.

Bangkok’s Chinatown to get a new look

Bangkok’s Chinatown is getting a makeover. A noticeable change will be to the food carts lining the main strip, Yaowarat Road.

In the revitalisation plan starting early next year, the food carts will be “more orderly” and “harmonised,” according to deputy Bangkok governor.

Last year, the BMA cracked down on street food vendors in efforts to clean up the streets and make sure food carts were following regulations. For Chinatown, food vendors will continue to operate along the street, as long as they are up to code.