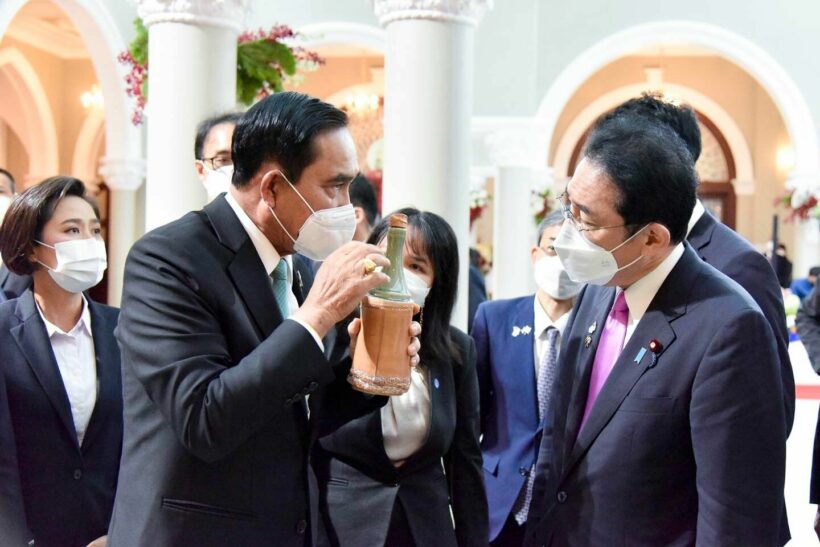 The Thai government has signed a loan contract to borrow 50 billion yen or about 13 billion baht (US$385 million) from Japan International Cooperation Agency or JICA to cope with costs of handling the Covid pandemic in Thailand. Thai PM and Defence Minister Prayut Chan-o-cha urged Thais not to criticise the government borrowing money again because the amount was included in the existing quota planned with the Japanese government a long time ago.

On May 1 to 2, Thai PM Prayut welcomed the Japanese PM Fumio Kishida to discuss cooperation on different topics like infrastructure, investment, startups and SMEs, humanitarian assistance to Ukraine and neighbours, and security cooperation against China’s growing influence in the Indo-Pacific region.

Aside from the topics on the table, Thai netizens focused on the new loan amount that the Thai government agreed with Japan. On May 3, the Thai Finance Minister, Akom Termpittayapaisit, explained to Thai media that he signed the agreement on Covid-19 Crisis Response Emergency Support Loan with a representative from JICA Morota Takahiro. The loan amount was 50 trillion yen or about 13 trillion baht. The authority said the loan was offered with low interest at 0.01% and a 4 year grace period.

Amarin TV reported that Thailand has a public debt of more than 9 trillion baht from the information updated in March 2022. So, Many Thai netizens complained about the new loans and demanded an explanation from the PM.

The PM said he was aware that Thai people would focus on the loan. He said the amount was included in a long-standing plan to be able to borrow money to solve social and economic problems in the wake of the Covid pandemic.

He said the government “gradually borrowed according to the needs and focused on domestic loan sources”. He wanted Thais to understand that the money was spent responsibly.

“Thailand has a strong financial status. If not, no one would let Thailand borrow money.”

alex12345
is it 50 billion or 50 trillion? .. im to lazy to read all this rubbish . someone tell me .. stat ... seems like maybe its confused or I am .. forensic accountants from the de@p trial where…
HiuMak
What do you think is the initial reason for this: https://thethaiger.com/news/national/thailand-and-japan-sign-defence-transfer-pact-to-counter-chinas-growing-influence

palooka
14 hours ago, Guest1 said: Because of just 400 Million US$? Come on! More the implication to foreign investors and currency traders that all is not as rosey as the Thais make out. If it is that small an amount,…

Guest1
27 minutes ago, palooka said: More the implication to foreign investors and currency traders that all is not as rosey as the Thais make out. If it is that small an amount, why bother borrowing? They will look at other …

palooka
3 hours ago, Guest1 said: They will look at other numbers, anyway: https://www.bangkokpost.com/business/2269795/public-debt-forecast-to-increase-to-62-of-gdp Bank of Thailand governor warns about growing debt levels, calls for sufficiency economic thinking - Thai Examiner Old news article but the economy has gone backwards since…