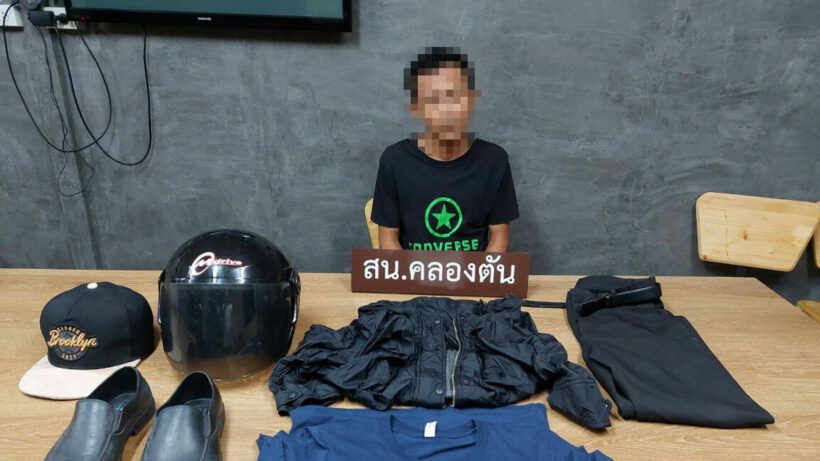 A man was arrested for allegedly robbing 7-Eleven stores in Bangkok because he needed to pay off the debts from the money he had lost from gambling. He apparently painted his face to hide his identity and used a pocket knife to threaten the cashiers.

The 30 year old man, identified as Sugipri, allegedly robbed two of the 7-Eleven convenience stores in by the Laem Thong village intersection. CCTV camera footage shows the man fleeing the scene on a motorbike. The motorbike was later found parked in the middle of a soi in the On Nut area. When Sugipiri arrived to claim ownership of his motorbike, he was arrested. Police say he was in possession of the items he had stolen along with a folding knife.

After being interrogated by the officers,  Sugpiri confessed that the Covid-19 pandemic affected his financial situation and therefore he went into gambling hoping he could win a jackpot. He ended up losing all his money and went into debt. He also claims that his accommodation has not been paid for months.

The robbery was filed and night and the man will be taken by the investigating officer for legal proceedings.

Benroon
Social media, the curse that just keeps giving ! ?
DiJoDavO
How is it that I got banned from Twitter for having an argument with someone about gender pronouns, but this is allowed?

AlexPTY
It's getting harder and harder since gold shops are closed

Ubon2530
4 hours ago, DiJoDavO said: How is it that I got banned from Twitter for having an argument with someone about gender pronouns, but this is allowed?  Because Jack Dorsey is a wanker. The stupidity of claiming to be 'non-binary…