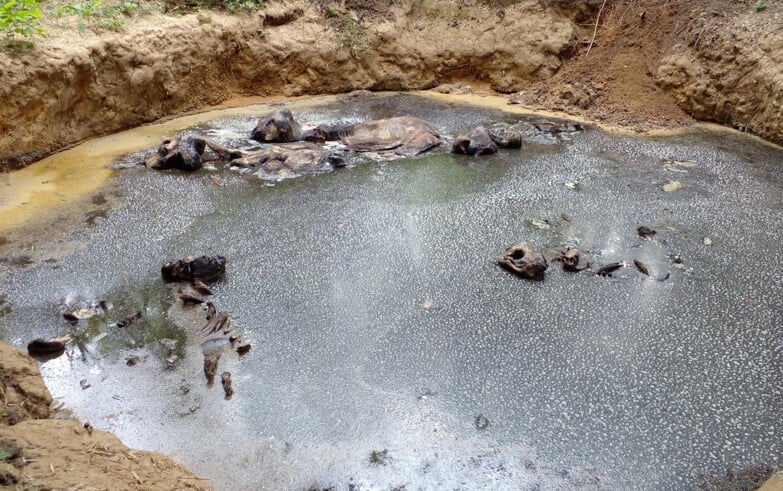 Elephants found dead in Kanchanaburi, photo by The Pattaya News.

In the latest tragedy for Thailand’s wildlife, 5 wild elephants were found dead in a national park in the western province of Kanchanaburi on Thursday. Even though they were just found this week, the elephants were estimated to have been dead for over 2 months after they fell into a natural sinkhole.

The chief of Lam Khlong Ngu National Park found out about the dead elephants from photos on a Facebook page, which showed the elephants’ bodies sinking into the soil pit. The chief alerted other officials of the post, and they showed up to investigate the elephants’ deaths. After a preliminary investigation, the officials determined that the sinkhole was caused by a soil collapse, which might have been caused by underground mining nearby.

In another elephant incident in 2019, 6 baby elephants got stuck in a mud pool in the central province of Prachin Buri, although the incident was only posted on Facebook last month. Unlike the recent Kanchanaburi incident, this story had a happy ending. Six naughty wild elephant calves that ran off from their herd to cool off in a pool of mud at a national park. The baby elephants played for so long that they exhausted themselves and couldn’t get out. Their muddy bodies were slipping and sliding all over the place and the calves just couldn’t seem to escape the mud. Park rangers from Thap Lan National Park used spades and pickaxes to dig out a slope for the elephants to walk up.

A home to many wild animals due to its abundance of national parks, Kanchanaburi struggles to protect elephants from a number of dangers. After a pickup truck hit and killed an elephant on a Kanchanaburi highway in January, 35 new elephant crossing signs were posted along that highway. LEEHAI
Another tragic event for elephants and for all of nature in general, as to often is the case, no accountability whatsoever from any of the peoples involved, another black mark against humanity being a part of intelligent life on planet…