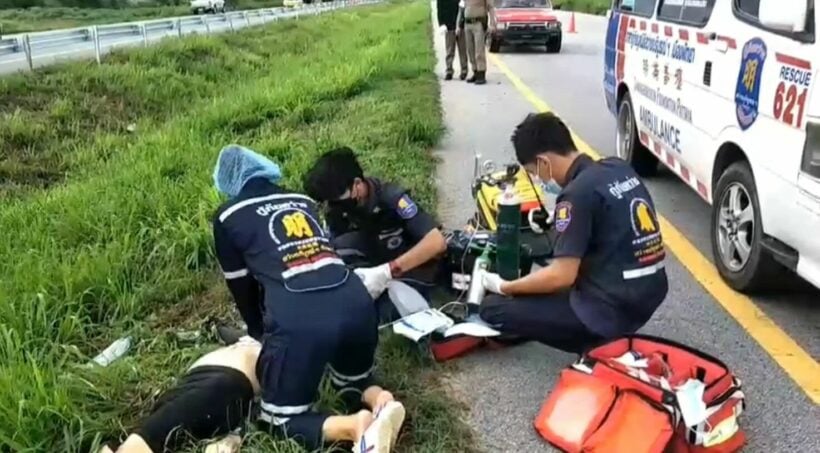 Officers from Huay Yai Provincial Police Station were notified of a road incident on the Sattahip – Korat road in Bang Lamung district of Chon Buri.

At the scene, one foreigner, who was believed to be a local expat, was found dead in a watercourse adjacent to the road. Thai media reported that the foreign victim was about 60 – 70 years old, but the police haven’t confirmed his identity or nationality at this stage.

The police and rescue team investigated and found a broken bicycle, a black pickup truck, and the corpse of a foreign man in a cycling outfit at the scene. The man was reported to have died from a broken neck. His heavily damaged bicycle was laying nearby and was taken as evidence by the Bang Lamung police. Police found ID indicating the name ‘Win Scherrenberg’. No nationality, age, and other details were given.

The pick-up truck driver, Samreang Unan, was waiting at the scene when police arrived and confessed to hitting the man on his bike. He claimed that he was in the right lane driving towards Bang Saen. He noticed a truck on the left lane and then suddenly saw the cyclist changing his direction to the left lane. The driver told police that he’d seen the man but couldn’t stop in time.

The man’s dead body was sent to a hospital, and the authorities will conduct further investigations and have contacted various consulates in the province to help find out more about the identity of the victim. There was no CCTV available to assist police in their investigation.

AussieBob
14 hours ago, Fanta said: I wonder what the driver will be charged with? Reckless driving seems to be the charge for hitting anything on two wheels. But dead men tell no tales :-( RIP I have seen many media…

AussieBob
14 hours ago, Soidog said: I wouldn’t feel safe in an armoured personnel carrier driving in Thailand. I drove a car and a bike nearly every day I’m here. It’s highly dangerous and you need to be in defensive driving…
Loong
Quote He claimed that he was in the right lane driving towards Bang Saen. He noticed a truck on the left lane and then suddenly saw the cyclist changing his direction to the left lane. The driver told police that…
Mazz11
I did a trip with two friends in 2012 riding motorbikes from Bangkok to Pattaya, then to Chiang Mai and back to Bangkok. It was a great experience but I did have a few close calls. I was a very…

Benroon
18 hours ago, Lyp14 [ctxa] said: Law, law, law… not everything is about following the “law”. Aren’t there traffic accidents in the West? You’d be surprised to learn that if we only count road deaths from four wheel vehicles, the…