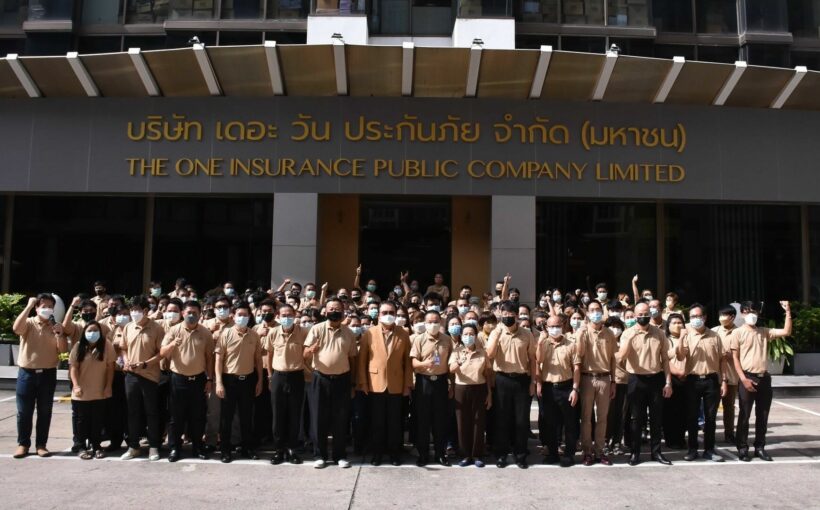 Former employees from an insurance firm bankrupted by Covid-19 have rallied outside the Office of the Insurance Commission, demanding overdue salaries and severance monies be paid. Around 300 employees of The One Insurance were made redundant when the firm collapsed, but have yet to receive payments and other compensation owed to them.

According to a Thai PBS World report, one labour activist said it has now been nearly 2 months since the firm closed and former employees still haven’t received what they’re owed. The law dictates that the Non-Life Insurance Fund must pay overdue salaries to workers who’ve been laid off, along with severance pay and other benefits. These are estimated at around 82 million baht, plus 15% interest. Payment must be made within 30 days of the January 14 announcement that confirmed laid-off workers would be paid.

The activist says many former employees are now in dire financial straits, due to the company’s sudden collapse, which gave them no time to prepare. It’s understood that some workers re over the age of 50 and fear they will face discrimination when applying for new jobs.

The Covid-19 pandemic has driven many Thai insurance companies to the brink, as a result of compensation claims arising from holders of “Found, Paid, Done” insurance policies, which offered coverage in the event of Covid-19 infection. Thai PBS World reports that The One Insurance had all its finances exhausted by the claims.

At the time, the OIC got involved and ordered the firm to stop selling any more policies and to concentrate on solving its financial difficulties. However, the Finance Ministry ended up having to revoke the company’s licence, which then led to mass redundancies.

Yesterday, the former employees involved in the protest said their situation is being ignored and they may stage an all-night vigil in front of the OIC if their demands for compensation and overdue salaries are not met.