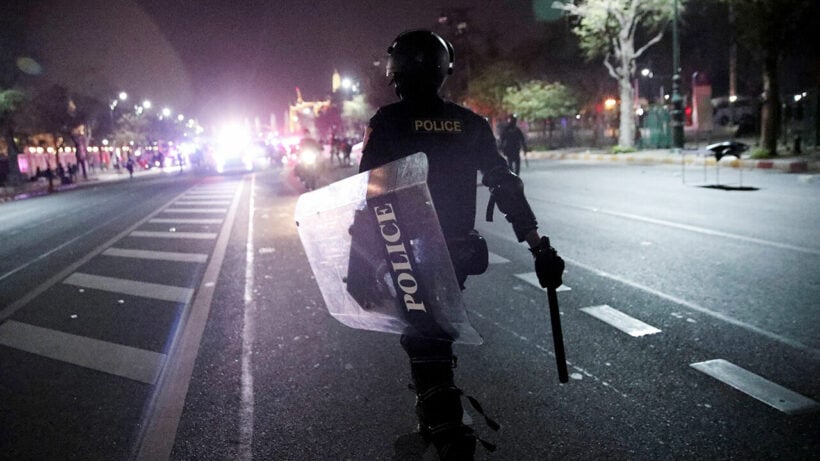 Many Thais are condemning police after officers in riot gear beat a medical volunteer at Saturday’s protest outside the Supreme Court near Sanam Luang in Bangkok. Photos circulated on Twitter of the man on the ground surrounded by police in riot gear. The man was wearing a bright yellow medic vest (confirmed). Many used a hashtag which translates to #policebeatingmedic.

UPDATE: The man has been confirmed as a “medical volunteer/nurse”.

The Rural Doctor Society, a group of Thai doctors, also condemned the violence and released a statement demanding legal action against the officers involved. They say the incident a serious violation of human rights. The Bangkok Post says Metropolitan Police Bureau commissioner Pakkapong Pongpetra defended the officers and said the man was in the area during a clash with protesters and officers had warned people to end the rally.

Protesters were calling on the end to Thailand’s draconian lèse majesté law, which carries an up to 15 year prison sentence for insulting the Thai Monarchy. They also called on the release of 4 prominent protest leaders who are in court detention on lèse majesté charges for statements they made at political rallies.

The rally started at the Democracy Monument and protesters marched to the City Pillar Shrine. Police in riot gear blocked the Supreme Court compound, but allowed 4 protest leaders to enter the shrine and seek blessings for the rally. At that point, the was a clash between some of the protesters and police. Tear gas cans were found at the scene, but the city police chief says officers at the rally did not use tear gas.