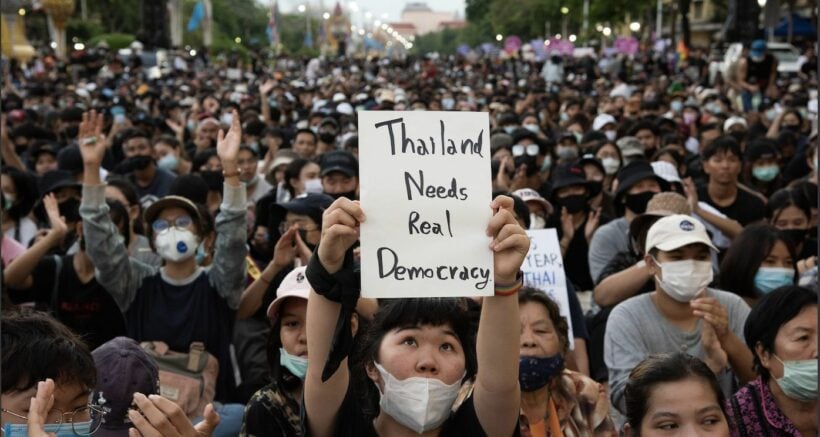 Up to 10,000 pro-democracy supporters attended a rally at Bangkok’s Democracy Monument yesterday. The crowds started swelling from around 3pm. Prior to the event, one of the organising groups, Free Youth, promoted the rally via their massive Facebook page following of over 350,000 followers. While the demographic of the crowd mainly consisted of high school and college students, participants of all age groups were present in the large gathering. The Student Union of Thailand was also involved with organisation of the event.

The 5,000 number is an unofficial estimate. Some of the protesters have claimed the attendance was closer to 10,000.

Droves of participants began arriving, dressed in black and sporting masks, protest signs and political props. Over 300 police officers floated in and around the fenced in monument, both protecting and monitoring the event. All traffic surrounding the monument was closed and people filled the streets as far as the eye could see.

Smaller pro-royalist groups remained on the outskirts and only a few small verbal disagreements broke out between the competition interests. No violence or scuffles were reported during the event. Just the day before the Thai PM had urged police not to use any violence against the protesters.

Sunday’s rally was well organised and played out more like a variety show… an assortment of music, performances and speeches took place under the distinguished national monument. Comedians, rappers, theater performers and spoken word acts took turns energising the crowd. While the event was focused on government change, other groups joined in, too. Voices from the Thai LGBT community, feminist groups and sex-worker rights groups all shared the stage. Protests signs calling for change of all sorts dotted the sea of people.

Most attendees sat on the ground throughout the event and the event had a happy vibe despite the profound changes they were demanding. Periodically the crowd would raise to their feet for a song or chant. Pop culture themes such as Harry Potter, Hunger Games and Stars Wars could be seen on shirts, signs and in song. The use of pop culture icons is part of the protesters being able to make their political points without direct reference to particular people or institutions, some of them particularly sensitive issues and cultural ‘no go’ zones.

The event grew to complete gridlock as the sun set. The mass of people’s phones illuminated the streets as they waved them in the air during softer songs. Drones could be seen soaring above the gathering, mostly capturing the event for future publicity.

Just after 10pm, recently jailed and bailed lawyer Anon Nampa took to the stage. For 10 minutes he spoke on democracy and the power of change. His words motivated the crowd and by the end of his speech the cheers had become overwhelming.

The rally continued until around 11pm. White cardboard birds attached to sticks could be seen flapping above the crowd. After the song finished the immense crowd slowly dispersed.

You can find more information about the Free Youth organisation HERE. 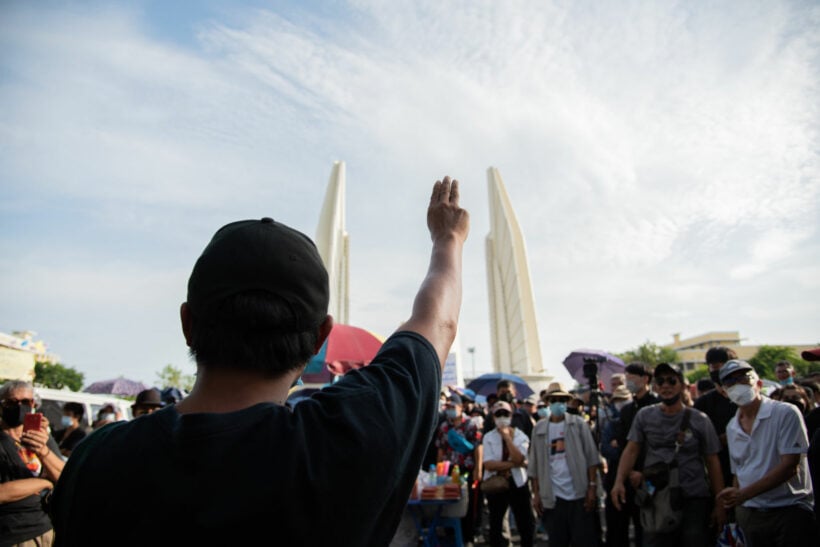 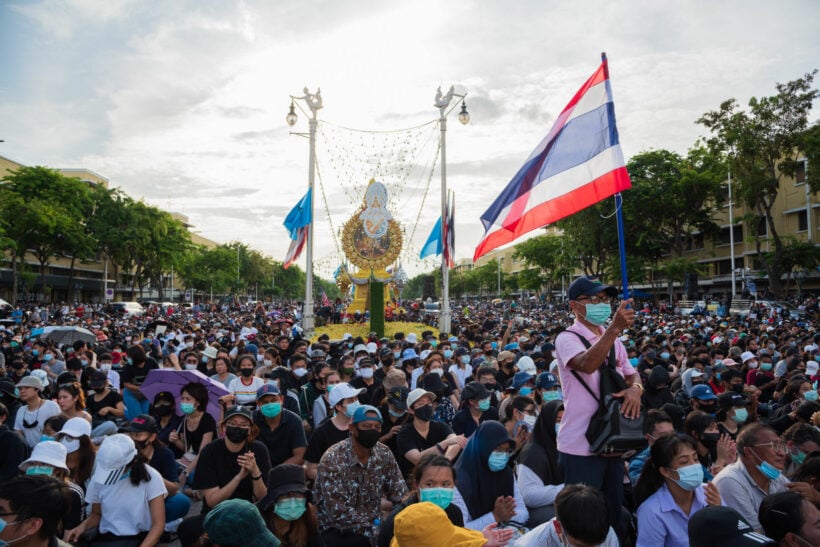 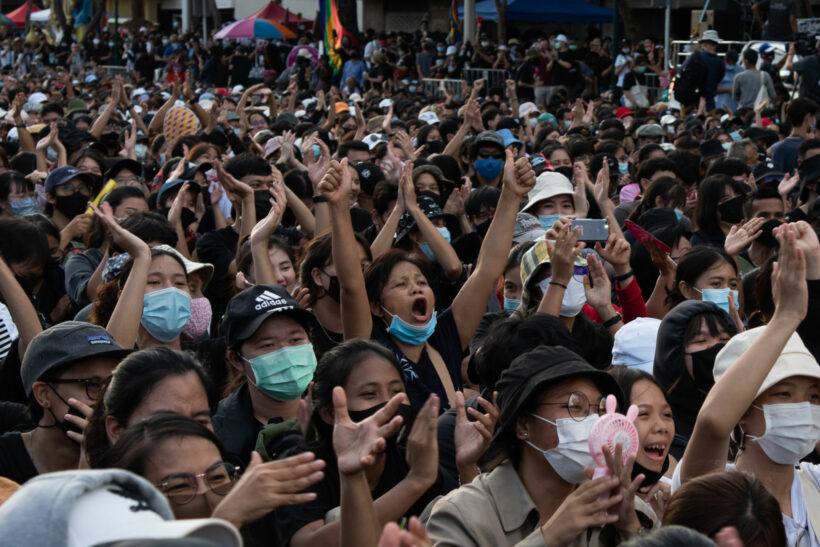 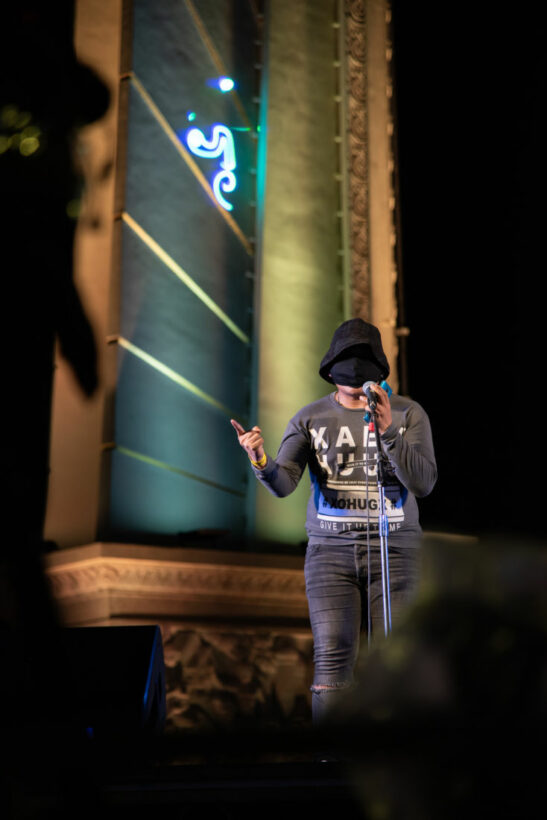 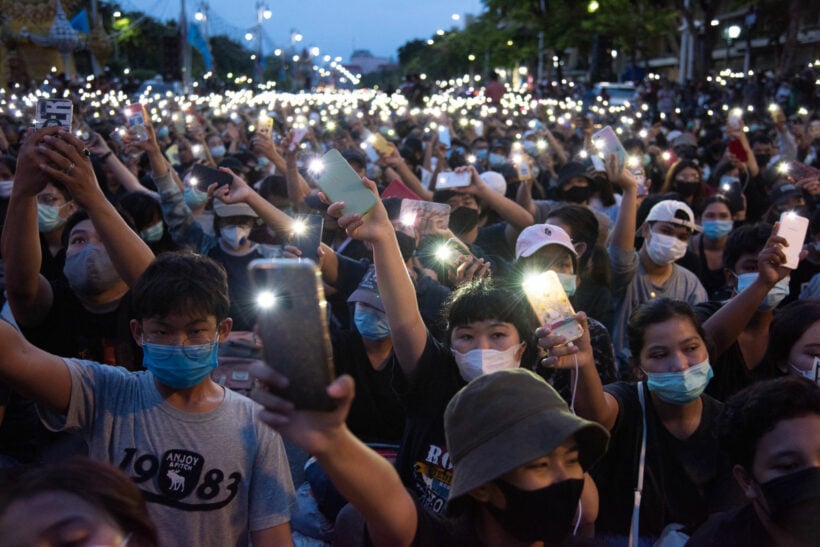 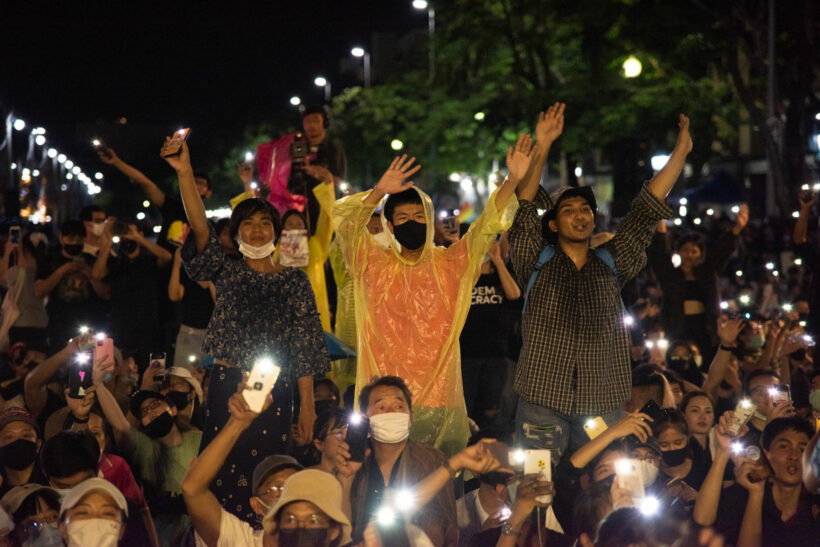 Thousands of job applicants line up Bangkok hotel before sunrise