About 250,000 Thai citizens are expected to attend the Royal Cremation of His Majesty the late King Bhumibol Adulyadej at Sanam Luang in Bangkok on October 26, Deputy Prime Minister General Prawit Wongsuwan said on Friday.

If Sanam Luang becomes overcrowded, the authorities will seek the cooperation of mourners to place funeral flowers at replicas of the royal crematorium at various sites around Bangkok instead, Prawit said. He was speaking after a meeting of the committee tasked with providing security and traffic during the Royal Cremation.

About 70,000 state officials and employees would provide security at Sanam Luang. Some registered volunteers would also assist with the tasks, he said.

A joint coordination centre with the Defence Ministry would be set up on October 1 to arrange security measures, while signs would be erected to inform the public of which roads to use and which roads to avoid (as they would be used by the royal funeral processions), he said. 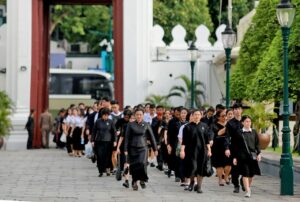