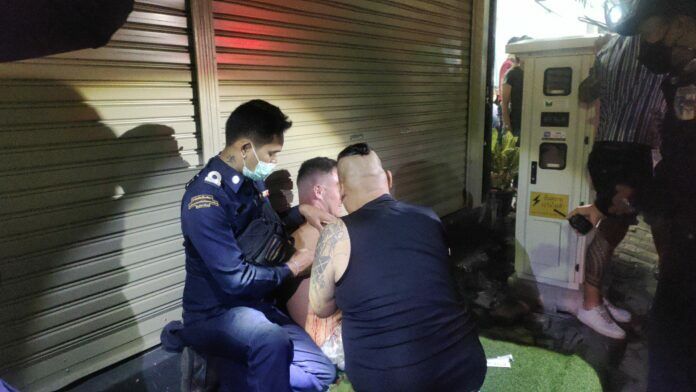 An unidentified foreign man was stabbed near Walking Street in Pattaya in the early hours of yesterday morning. Despite bleeding heavily, the man refused to get his wounds treated at hospital. He refused to explain what happened or give personal details to the police.

Eyewitnesses told police that a physical fight broke out between two foreign men who had been arguing outside a bar near Walking Street in South Pattaya at around 1am yesterday morning. Then, one of the men pulled out a weapon “similar to a knife” and slashed the other man’s arms causing him to bleed heavily. The assailant fled the scene.

After the incident happened at around 1am, police shut down all entertainment venues for the night. Nightlife venues are supposed to be closed by midnight anyway according to Thailand’s current Covid-19 restrictions, and police said they would be sure to enforce the rule in future. On Friday, Thailand’s Centre Covid-19 Situation Administration – the CCSA – extended closing times of bars and nightclubs until 2am, and 1am in some places. However, the new closing times are not yet effective and are expected to come into effect on July 1.

The police said they will be checking all CCTV cameras to help them identify both foreigners. Police will summon both parties to the police station so they can investigate the incident further.

Dancbmac
Not too smart!  May have stopped the bleeding, but might turn into a nasty and/or possible life threatening infection.  Probably not enough blood alcohol to sterilize his wound???
TWS60
Haircut looks a fresh, maintained, high-reg military cut.  His buddy, in other photos from Pattaya News source article, looks a well maintained medium-reg military cut.  Dunno of course but that style haircut is very specific and jumps off the page. …