A month after the first cases of the Covid-19 variant, Omicron, were officially detected in South Africa, we know a bit more about the potential dangers, but not a lot. Anecdotally, there have been plenty of doctors saying that the new variant appears to produce milder symptoms than earlier variants, as is often the case with these viruses. But they also caution that much of this early commentary can be attributed to the high rates of vaccination and not the actual lethality of the variant.

This is also evident in the UK, for example, where Omicron is now forming a high proportion of new daily infections, and case numbers rocketing, but the death rate and hospitalisations, so far, remain low. Yesterday the UK reported 90,418 new C-19 infections, even outdoing the US, where daily new infections are also on the rise, with 85,924 (worldometers.info).

Michelle Groome from the National Institute for Communicable Diseases in South Africa says there has been an uptick in Covid hospitalisations and deaths but that the level is very much lower than the baseline period between the second and third wave (around March to May this year).

The early data also suggests the Omicron variant “may be more contagious” than the Delta Covid variant “but less likely to cause severe illness”, but scientists and the WHO still urge caution with these early findings as the new variant is still new and many infected people are only now starting to show symptoms, let alone have them reported, tabulated and the data analysed.

Reuters reports that in South Africa, the UK and Denmark, the number of new Omicron variant infections approximately doubles every 2 days. So, scientists warn, even if it is less deadly, or if the high vaccination rates in some countries are limiting the more severe symptoms, the sheer high transmissibility is a clear and present danger.

Early research is also indicating that the 2 doses of the current vaccines “have vastly reduced protection against Omicron”.

Some data from the UK reports that ” cold-like symptoms” are more common among people infected with the Omicron variant of Covid-19.

On the same note, Dr. Angelique Coetzee, Chair of the South African Medical Association, and the first doctor to detect the Omicron variant, says that fatigue is among the most common symptoms observed, “along with headaches, body aches and scratchy throat”.

The data in the UKwas collected in the week between December 3 – 10 in London, where Omicron is now the dominant Covid strain, based on over 52,000 tests.

But the early anecdotal evidence is not universally good.

“But other country data does not say that. In Denmark data shows that hospitalisation rates appear to be on par with other variants of the virus.”

But, generally, scientists remain confident that a third ‘booster’ vaccine is likely to restore much of the vaccine’s efficacy against the new strain of the coronavirus.

Around the world, as of the past 24 hours, the UK leads in the number of new Covid infections detected. Notably, Vietnam is also in the Top 10 of countries reporting new cases in the past 24 hours. 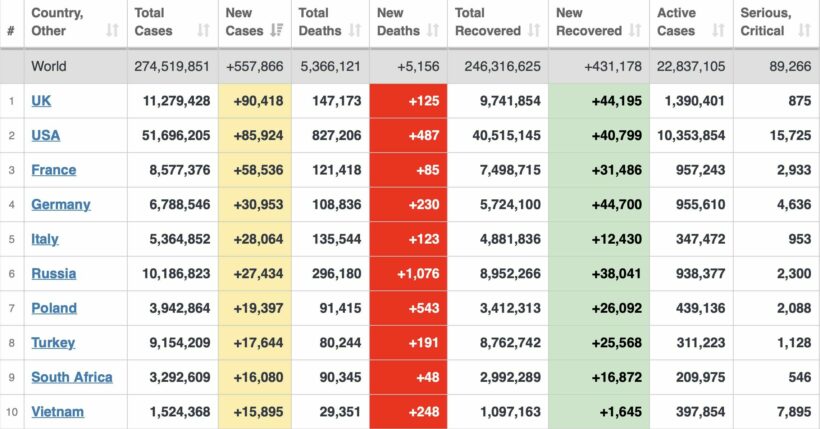 socal
On 12/18/2021 at 8:55 PM, Cabra said: Early days I would say, but seemingly significantly more transmissible... making more people sick, particularly in the West (and more hospitalizations, particularly among the unvaccinated as reported by hospitals). Seems the jury is…

Rain
5 hours ago, socal said: A year into the biggest vaccination drive in human history hasn't stopped the mutation and spread of covid. Just let it spread and get herd immunity. What I find strange is that the people who…
Manu
On 12/20/2021 at 11:51 AM, Stonker said: The rest isn't worth replying to, but it all depends on what's meant by "dangerous". If you mean the chances of you dying from it if you catch it - almost certainly less.…
Stardust
On 12/19/2021 at 11:14 AM, Manu said: Hang on now...Attributed to high rates of vaccination? Not because the actual lethality of the variant? Why implying this? The variant has been first discovered on Nov. 9 in South Africa So in…
Stardust
On 12/20/2021 at 12:52 PM, nobusinessofurs said: Do you actually believe any government is gonna down play any variant of the China virus....I think not myself Average age 60??? Where in Europe?? Such a country doesn't exist in Europe!

Can Men & Women Have A Platonic Relationship? | The Stinky Food challenge

Ryanair CEO says anyone who refuses vaccine is an "idiot"