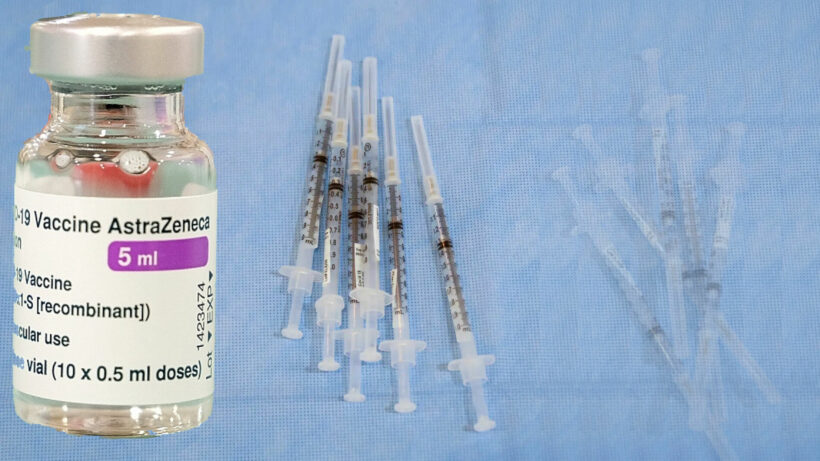 PHOTO: Thailand will receive half as many AstraZeneca Vaccines. (via QZ/Wikimedia)

A senior health official has announced today that the previously declared 10 million AstraZeneca vaccines per month expected to be distributed in Thailand will now be lowered, and perhaps cut in half. The drop of 40 – 50% delivery comes as Thailand’s domestic facilities at Siam Bioscience say they are unable to meet production needs for domestic distribution and promised international exports.

Revising the original commitment, AstraZeneca Thailand  will now aim to deliver 5 – 6 million vaccines per month in Thailand. The plan will start this month just as the original 10 million vaccine plan was scheduled to start. Now a portion of the vaccines produced in Bangkok will be sent to other countries in Southeast Asia. This information was in a letter written by AstraZeneca and shared by the director of the National Vaccine Institute.

AstraZeneca Thailand’s facilities serves as the vaccine’s hub to Southeast Asia, and already have commitments to deliver vaccines to Taiwan, the Philippines, and Malaysia. Countries have already complained about Thailand being unable to fulfil its commitment with shipments being delayed.

This change in plans will leave the Thai government scrambling in its quest to vaccinate the country’s population, as the vaccine rollout plan relied primarily on locally-produced vaccines having passed on opportunities to purchase doses from abroad previously. With the recently announced halving of vaccines expected to be received from Moderna, private hospitals will only have 5 million vaccines to distribute. Pfizer and Johnson & Johnson are also approved but no concrete plans for the importing have been confirmed.

Chulabhorn Royal Academy had sidestepped the government to import their own supply of the Chinese Sinopharm vaccine, launching the first million inoculations already with the expectation of 5 million more vaccines to come. But the majority of vaccines to make up for the shortage of AstraZeneca will likely come from the reasonably steady supply of Sinovac vaccines from China.

Tjampman
10 hours ago, Leeshard said: Just a reminder to ex-pats, if you’re thinking of taking a trip back to your western country or Australia within the next year, perhaps when vaccinated travellers no longer need to quarantine in either direction, stay well clear of…
Alavan
13 hours ago, Guevara said: It didn't 'go' to the UK, it was manufactured in the UK. No, next to 2 plants in the UK 2 plants in the EU produced it and exported it to the UK.

AlexPTY
this is much better than TAT numbers, those usually meed to lose at least one "0" to come closer to reality dbeatty333
Obviously the Thai government hasn't paid Astra Zeneca for the vaccine they ordered or they couldn't cut the order in half.  So who is to blame for that???

Augratin
I got my first AZ shot a few weeks ago; scheduled for the second in October.  I wonder if that'll be postponed now.