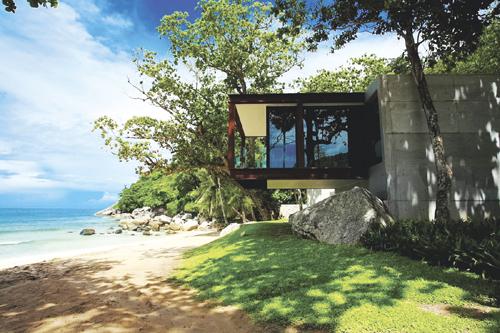 PHUKET: I believe Chinese zodiac signs went out sometime in the 1970s, though clearly citizens of Sedona and Byron Bay didn’t get the memo.

We are about to enter the twelve year cycle of the Snake. From a quick look around the zodiac, the slimy reptile is still trumped by the Dragon, but nonetheless, words like mysterious, cattiness (love that one) and malevolence describe some of its supposed traits. This is a pretty potent package.

Heading out of the dark days of 2012, into the stark sunshine of 2013, this year I’ve decided not to write any self-indulgent ‘best of’ columns or quips. Maybe the horizon isn’t even that bright and it’s more like a midnight run at the refrigerator with a bad case of the munchies?

Let’s take a look at what’s going to buzz in the year ahead, or at least what’s worth ‘getting up for’ in the whacked out world of property, tourism and hotels.

I must first add that this is a random ‘bird’s-eye view’ appraisal, it is in no particular order and has no favors given, nor asked. Now that we have dispensed with the fine print, here we go:

Point Yamu by Como – After years of tribulations and management changes, this development looks to answer the question, “Who on the East Coast can become a mainstream hotel in the market?” Sri Panwa took the bar far and ran with it, then the Regent stuck in a shoulder and has moved ahead, now the impetus is on Point Yamu to bring it home.

The Naka Phuket
Designed by Duangrit Bunnag is a chic offering set to position well in the boutique market and is a unique reprieve from what currently plagues the island’s hotel trade. All these ‘same sames’; at last the cookie cutter was thrown away and we can celebrate something new and different.

Luxury Villas
After being stuck in neutral with an inevitable funk of fatigue, we’ll see a new generation of multi-million dollar property offerings at Rosewood on the Patong headlands, Point Yamu, Anantara Layan and the nearby Kajima estate. Throw in the new Malaiwana Residences and perhaps it’s time to check in on the progress of the Park Hyatt on Koh Sireh.

‘Condotels’
For better or worse, investors are back in Phuket and these lifestyle offerings have regained some glitter. Laguna Shores was only the beginning. Next comes the Amari Residences and a slew of others are expected to tempt overseas purchasers with the dream of ‘branded-hotel managed units’ and high-yield returns. If you read my column on a regular basis, you understand the reality. Enough said.

Resales vs New Sales
The balance has shifted in favor of resales due to a flat and broad resort grade market, in addition to the Global Financial Crisis and an overabundance of secondary product. We’re seeing new projects and phases selling, which shows that buyer sentiments are improving.

Airport and Tunnels
Thank God, there are signs of life on Phuket’s infrastructure development and dirt is being pushed. It’s going to be ugly for now but at least the ball is rolling.

Celebrity Skin
Expect new offerings of international-branded beach clubs, designer and maybe even some property-branded developments to surge in the snake era. In Asia, giving face has never been more important.

Yingluck Shinawatra
The jury is out on the effectiveness of the current administration and there’s no end in sight for the reds, yellows, whites, blacks, and browns. But in the age of Instagram, she is without a doubt the most photogenic world leader. Thailand – smile and say cheese.

Sure I can go on and on, but this needs to end for God’s sake. The future of Phuket is ahead of us, not behind as the naysayers would have you believe. Certainly there will be time to ponder this as the traffic gets worse or you try to find a parking slot at
Central but reflection is good.

I’m not sure about this whole snake thing, but things can change. Or possible get worse. The only thing we can be sure of is: in the land of same same, nothing stands still for long.

The 128 home Inizo project near British International School (BIS), which was launched last year, is expected to complete in April. Pricings are from just under 4 million baht up to just under 5mn baht.

Leading destination resort Laguna Phuket has signed a deal for a Challenge half Ironman on December 1, 2013.

The Ironman 70.3 Asia Pacific Championship, which has been held on the island the past two years, will be moving on to Melbourne, Australia.

Laguna’s Tri-Fest includes the long running Laguna Phuket Triathlon, which will run on
November 24, the week before the Challenge event.

Phuket Property: A touch of class and comfort