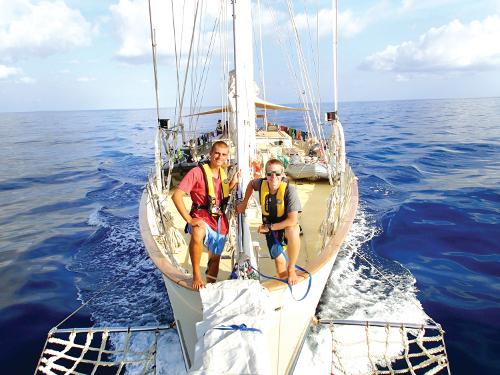 PHUKET: With a crew of 26 university students, most who had never been aboard a yacht, the 112-foot schooner Argo sailed out of Yacht Haven Marina mid-last month, set on a course for adventure and education on the high seas.

The Bangkok-built ship was launched in 2006 and was designed and commissioned to be the flagship for SeaMester, a unique maritime educational program for university students. Since her launch, Argo has circumnavigated the globe twice, and offered hundreds of SeaMester students the chance to cross oceans while furthering their educational and personal goals.

Her current voyage has so far taken her around Phang Nga Bay, Krabi, Koh Phi Phi and north through the Andaman Sea to the Similan islands, their next leg will take them on to the Maldives. On the way back, they will head up the Gulf of Thailand, stopping at Koh Samui and Koh Samet as well as Jomtien port before arriving in Bangkok in mid-April.

Along the way, the 26 students will learn seamanship skills, become certified PADI scuba divers and take classes in marine biology from the team of seven dedicated and professional crew members – not to mention the invaluable teamwork and life experience they will gain during their three months on-board.

Jim Stoll, one of the key figures behind SeaMester, has been deeply involved in teaching and sailing since the 1960s – turning the usually quiet summer season at his family’s marina into a thriving summer sailing school for teenagers. In 1970, Jim expanded the concept, taking his school to the water full-time. Jim sailed the Atlantic waters aboard 156′ Te Vega and 175′ Te Quest, enrolling 86 teenagers every year in a high school program of study and travel.

Some twelve years later, with children of his own, Jim moved back ashore to develop motivational programs for young adults. In the mid-eighties he once again headed to the water, and in 1995, Jim was joined by Mike Meighan and Travis Yates. As a recent oceanography and marine biology graduate, Mike dreamed of creating a truly interactive educational experience. Using the principles of experiential education, Mike developed SeaMester in 1998 and acquired the 88-foot school ship, S/Y Ocean Star, in 1999 and later commissioned the Argo.

“We started teaching sailing and diving programs in the mid 60s and for all of the 70s we had two schooner yachts that took 86 students and 22 staff aboard for nine month voyages as a floating high school, operating mostly in the Caribbean and the Mediterranean, although we made trips from the Amazon to Helsinki and all around the North Sea as well for 12 years,” says Jim.

Jim is adamant that the sailing, scuba and marine biology skills are only the starting point of the SeaMester experience.

“Life skills are more important than seamanship skills at SeaMester. We are doing our job well when our students take on the full responsibility of operating the vessel over the 90 days that they are on board.”

“Seamanship is of course a natural part, yet working cooperatively and taking on responsibilities aboard are more important than the seamanship aspect. Personally, I like seeing them come together as a team and take on a variety of responsibilities. At the end of the program they are so bonded that many remain friends for life,” says Jim.

The Argo also takes part in several Yachting events in Phuket, having competed in the King’s Cup Regatta three times and she also regularly attends the Phuket Superyacht Rendezvous to give the crew as chance to relax after their long trip.

Blair Williamson was lucky enough to get a place as a student aboard Argo during her maiden voyage and was instantly hooked, she now works for SeaMester as a crew member and teacher.

“I joined SeaMester in hopes of getting to see remote islands of Thailand and Malaysia, to get some hands on sailing experience and do my PADI Divemaster course. What I got out of the experience was that and so much more,” says Blair.

It was during this voyage that Blair became addicted to life at sea, and she remains ever-grateful for the life experiences and opportunities that the program provided her. In fact, she remembers the exact moment when she knew that sailing was what she wanted to do for a living.

“I was on bow watch, to make sure we didn’t hit anything, and all of a sudden I noticed some different splashes and a slight glow off the bow. I looked down to see glowing darts in the water in every direction. Hundreds of baby dolphins had joined us and were swimming in every direction. Their movement in the water caused the bio- luminescence to glow and created quite a light show for me. That moment was unbelievable and something I will never forget. It’s moments like this that you realize how beautiful life at sea is and it hooked me for life,” says Blair with relish.

Custom built as a training vessel, the Argo has no electric winches for raising the sails and everyone on board has to do their part and work in unison to get her moving and learn sailing the traditional way.

“Sailing Argo is incredibly exhilarating. You have to work as a team to do everything. The boat was designed and built specifically to be a school training vessel, so Argo moves and operates because the students are making it happen. All responsibilities are shared equally across both students and staff members. Having the program designed this way creates such a sense of accomplishment for everyone on board,” says Blair.

As part of the program, students take turns writing an online blog detailing their experiences. The latest batch of students have only been aboard for two weeks, but are clearly thrilled to be taking part, especially in the scuba diving.

“Diving was great fun for all, we finally got to test out our new skills in deep water and catch our first glimpse of the marine life that we will soon come to memorize and know by name. Everyone really enjoyed the dive, especially because it brought us one step closer to certification. The enthusiasm on board is contagious, everyone is so excited to be here and be experiencing this wonderful opportunity,” wrote Caroline, who boarded the Argo just two weeks ago in Phuket, on the SeaMester blog.

If you want to read more blog posts from the SeaMester students as they continue their journey over the next two and a half months, or if you want to learn more about how you or your children can get involved in the program, visit their website here.

Beatle Mania: Phuket, are you ready for tonight?