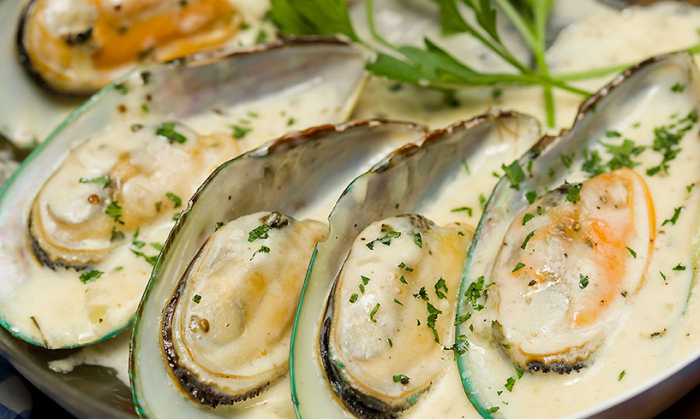 PHUKET: Nestled in the chaos of Patong’s Jungceylon shopping center is an inviting seafood joint by the name of Cafe Fish.

I was shown to a comfortable booth on one side of the spacious restaurant, and after a quick visual sweep of the place was overcome with nostalgia. Memories of long, hot days at the beach and sensational seafood dinners with family and friends came flowing back as smoothly as the perfectly-chilled white wine being poured into the glass in front of me.

In the back of the restaurant was a tank full of live Canadian lobsters, which are flown in every Friday from the chilly country’s eastern coast. In a tank below were a group of four types of live oysters – also flown in weekly – ready for the picking.

If I closed my eyes, I could imagine a sleepy beach town – like those picturesque getaways on the east coast of the US or Britain’s southern coast – was just a few steps away.

Soon enough our table was covered in plates of intoxicatingly aromatic food.

Closest to me was a frying pan full of crispy fried calamari and French fries. This sinful dish left nothing to be desired – the outside of the calamari was fried to perfection and the inside was cooked just right, not a minute overdone.

For all the dippers out there – like me – the fried calamari came with a side of creamy, tangy tartar sauce.

While we are on the topic of dipping sauces, Kirk Stucker, operations manager of Café Fish, suggested that we sample a bright red piri sauce that was sitting on the end of the table. The appearance was a bit frightening – it was clear this condiment packed a punch.

“The piri is made from imported ingredients from South Africa: lime juice, spices and chilis,” Kirk explained.

“I use this sauce all the time. I put it on everything: eggs, meat, rice, everything.”

I cautiously dipped my calamari into the fiery-red sauce and instantly understood the obsession. The piri jolted my taste buds, but in the best way possible.

Once I was able to peel myself away from the calamari and piri I noticed that an impressive seafood platter had also appeared before us. This delectable-looking dish was loaded up with all of the essentials: grilled calamari; mussels in a creamy herb sauce; white wine clams; lemon, butter and coriander dressed prawn; and grilled seabass, served next to a pile of Spanish rice.

There is no easy way to pick a winner when it comes to this dish. Each selection of seafood was unique.

The grilled calamari had that signature texture we all know and love – the one that proves just how fresh the squid actually is. The same went for the seabass. The fish was flaky and melted in your mouth.

Next up were mussels covered in a creamy herb sauce. I had been on-the-fence about mussels my entire life before sitting down at that booth in Cafe Fish. The sauce had a fantastic, yet simple, flavor that still allowed the taste of the mussels to take the lead. For me, this dish stole the show. I think this reaction was anticipated, as an extra plate of the mussels materialized during the meal.

Runner-up to the mussels were the prawns. They were split in half – lobster-style – and basted in butter, lemon and coriander before being thrown on the grill. The dressing complimented the prawns and gave them an extra kick of familiar flavor one normally doesn’t encounter when eating Thai-style seafood in Phuket.

Last, but certainly not least, were the clams cooked in white wine. Yet another simple dish with Western-style finesse but simple flavors that allow the star – in this case, the clams – to shine. If a small sampling of clams isn’t enough, Cafe Fish also serves up a spaghetti dish topped with them. In this case, the white wine doubles as a marinade for the clams, and a light, yet flavorful, topping for the noodles.

Between the simple, yet mouthwatering, seafood, comfortable and inviting atmosphere, chilled wine and good company, I felt compelled to sit and chat all night. Cafe Fish transports the mind and the senses to another place entirely – away from the hustle and bustle of Jungceylon and busy Phuket – without having to get up from a cozy booth.

Cafe Fish, open daily from 10am to midnight, is located outside, on the ground floor of Jungceylon opposite Robinson department store. For more information, find Cafe Fish Oyster Bar and Seafood Grill on Facebook or call 076 366790.

An island of Asian flavors in Patong’s fast-food strip