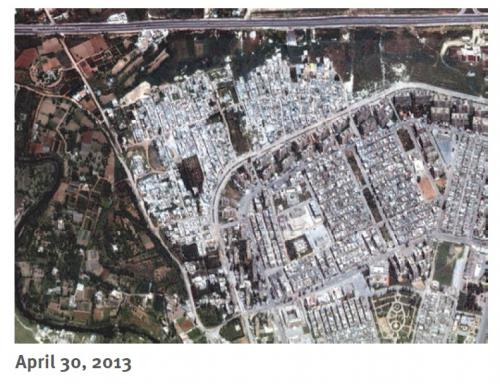 The New York-based advocacy group published before-and-after satellite images of the destruction, along with witness testimony, in a report released on its website.


Video footage of homes being demolished. Video: HRW
It says Syria deliberately and unlawfully demolished thousands of residential buildings in the year from July 2012, estimating the total built-up area destroyed at 145 hectares (360 acres), the equivalent of 200 soccer fields, and said many of the buildings were apartment blocks up to eight storeys high.

Reuters could not immediately reach Syrian authorities for comment on the allegations. Human Rights Watch cites Syrian officials and pro-government media as saying the demolitions were conducted to remove buildings constructed without the necessary permits or as part of urban planning efforts.

But it said “the context and circumstances” of the destruction showed it was actually intended to punish civilians living in areas that had previously housed rebel fighters.

It said the demolitions often occurred after government forces had cleared an area of rebels and in some cases extended several kilometres away from military or strategic locations which the authorities might be justified in protecting.

It said the destruction violated internationally recognised laws of war forbidding combatants from targeting civilians, and said Syrian authorities should be held accountable.

“No one should be fooled by the government’s claim that it is undertaking urban planning in the middle of a bloody conflict,” said Ole Solvang, a Human Rights Watch researcher.

“This was collective punishment of communities suspected of supporting the rebellion.”

A first round of peace talks on Syria wraps up Friday with both sides in entrenched positions and the U.N. mediator expressing frustration that it had not even been possible to get agreement for an aid convoy to enter the besieged city of Homs.

After a week of talks at the United Nations headquarters in Geneva, the opposing sides in Syria’s civil war were still stuck on the question of how to proceed.

Friday’s closing session was expected to be largely ceremonial, with government and opposition delegates expected to meet again on February 10.

“I hope that in the next session, when we come back, we will be able to have a more structured discussion,” mediator Lakhdar Brahimi said.

He was “very, very disappointed” that a U.N. aid convoy was still waiting fruitlessly to enter the rebel-held Old City of Homs, where the United States says civilians are starving.

Diplomats say that a top priority is to keep the talks process going in the hope that hardline positions can be modified over time.

The sides took a first tentative step forward on Wednesday by agreeing to use a 2012 document as a basis for discussions, but it was clear on Thursday that they are still at odds.

Thursday’s session, however, began with a rare gesture of harmony, when all sides observed a minute’s silence for the 130,000 people killed during the three-year-old war.

“All stood up for the souls of the martyrs. Symbolically it was good,” opposition delegate Ahmad Jakal told Reuters.

But the sides quickly shifted back to their disputes. The government delegation accused the opposition of supporting terrorism for refusing to sign up to a resolution opposing it.

“We presented a proposal that the two sides might agree on the importance of combating violence and terrorism. The other side rejected it because they are involved in the issue of terrorism,” Deputy Foreign Minister Faisal Mekdad said.

Damascus uses the word “terrorist” to describe all rebel fighters; Western countries have declared some Islamist groups among the rebels, such as the Islamic State of Iraq and the Levant (ISIL), to be terrorists but consider others to be legitimate fighters in the civil war.

“The regime today provided a one-sided communiqué. It wants to confuse ISIL with the people of Syria who took up arms and defended their families,” opposition spokesman Louay al-Safi said.

The 2012 agenda, known as Geneva 1, sets out stages to end the conflict, including a halt to fighting, delivery of aid and agreement on setting up a transitional government body.

While the opposition wants to start by addressing the question of the transitional governing body – which they believe would require President Bashar al-Assad to give up power – the government says the first step is to discuss terrorism.

U.S. and Russian officials, co-sponsors of the conference, are in Geneva advising the opposition and Syrian government delegations, their respective allies.

The 2012 agenda, including its call for a transitional government, was drawn up at a time when Western countries mainly believed Assad’s days were numbered. But the past year has seen his position improve on the ground and diplomatically.

Last year saw Washington abandon plans for strikes to punish Damascus for using chemical weapons, ending more than two years of speculation that the West might join the war against Assad.

Instead, Assad agreed to give up his poison gas stocks, a complicated process that has fallen behind schedule.

Reuters reported on Wednesday that Syria had given up less than 5 percent of its chemical weapons arsenal and will miss a deadline next week to send all toxic agents abroad for destruction.

“The United States is concerned that the Syrian government is behind in delivering these chemical weapons precursor materials on time with the schedule that was agreed to,” U.S. Defence Secretary Chuck Hagel said on Thursday.