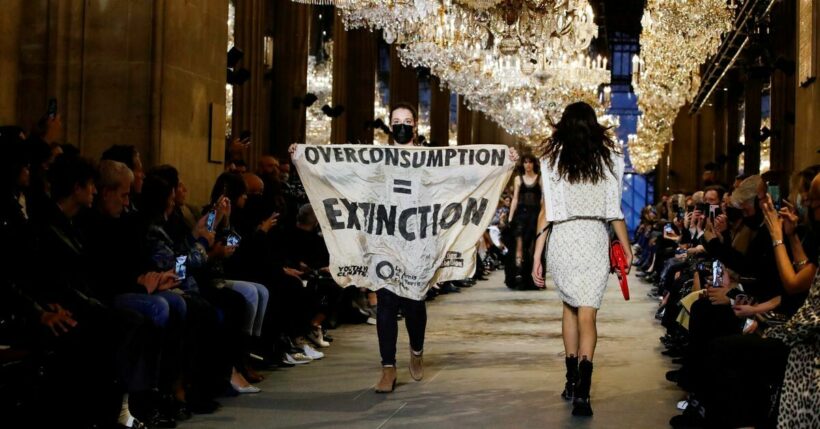 Climate change activists from the Extinction Rebellion group have disrupted a Louis Vuitton catwalk show during Paris Fashion Week. According to an AFP report, a protester invaded a catwalk in the Louvre art gallery to slam the fashion industry for its negative impact on the environment.

An activist carrying a banner that read, “”Overconsumption = extinction”, managed to climb onto the catwalk as models were walking along it, before she was hauled off by security guards. A statement issued by Extinction Rebellion, Friends of the Earth, and Youth For Climate confirmed that around 30 activists were involved in arranging the protest, adding that 2 had been arrested.

Activists have called on the government to take action against so-called, “fast fashion”, pointing out that 42 items of clothing per person were sold in France during 2019. Climate change protesters are demanding that the government introduce an immediate cut in production levels. According to the AFP report, there has been no comment from the Louis Vuitton fashion house.

gummy
What is the world coming to ? A disruption of an event such as the the Louis Vuitton catwalk show eagerly viewed by billions around the world no doubt is shocking. What Next a disruption to the Conker World Championships…

DoUKnowWhoIAm
“fast fashion”, pointing out that 42 items of clothing per person were sold in France during 2019." So, what number of items per year would be acceptable? Would it be OK to change underwear now and then?

AirAsia Malaysia requiring all passengers to be vaccinated