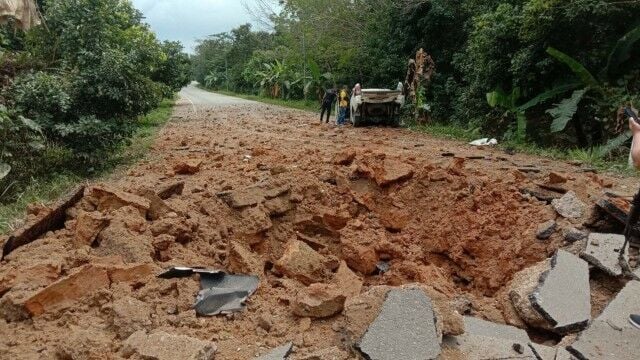 5 police officers were injured in a bomb explosion in Narathiwat, a predominantly Muslim province bordering Malaysia that has been plagued with violence related to the religious separatist insurgency.

Officers were on their way to investigate a fire at a cell tower in the Si Sakhon district when a bomb planted under the road exploded, injuring 5 officers and damaging their pickup truck. The officers were sent to the Si Sakhon Hospital and are now in stable condition.

The Explosive Ordnance Disposal team investigated the site. They say the bomb was planted under the road and wired to a 25 kilogram liquefied petroleum gas cylinder. Narathiwat deputy police chief Suthon Sukwiset says he suspects the bomb was ignited using a radio signal.

“The bombing could be a coordinated attack on officials planned by an unknown group of insurgents… Earlier that morning, an unknown suspect had set fire to a cell tower using motorcycle’s tyres as fuel, probably in an attempt to lure officials into the bomb trap.”

Threats were made to Buddhists and soldiers in the area and 2 cell phone towers for True and Dtac were set on fire before the explosion yesterday morning. A cloth banner was hung from a bridge in the Si Sakhon district which read “Buddhist Thais are not allowed to hunt in this area for Muslims to make their living.” In another threat, “Soldiers get out” was spray painted on the road between Si Sakhon and Chanae districts.