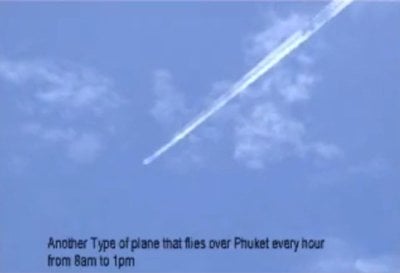 PHUKET: Air traffic control officials have dismissed as “crazy” a video circulating on the Internet purporting to show a mysterious unmarked airplane leaving “chemtrails” in the sky over Phuket.

The video was posted on YouTube on May 19 by a user calling himself “robinhoodlum”.

“Chemtrails in Phuket. Caught on tape at last,” says the narrator in a British accent, as the camera follows a plane leaving a trail through the sky.

The video invites users to speculate over “what the hell” the substance is. “I doubt it’s something that makes us healthy and boosts our immune system,” robinhoodlum posted under the video.

Other users have posted theories. “The barium gets into your head and shows up on global positioning systems designed to work off the barium in your head. Aluminum amplifies the signal by also accumulating in your head,” wrote Kitt0000.

Samonitus connected some dots: “Wonder if it has something to do with the hostilities in Bangkok. The trails probably contain tranquilizer.”

“It’s normal,” he said. “It’s just what happens when the engines heat the cold air… Even my nephew, five years old, knows about it.”

About 50 seconds into the video, the trail disappears. The narrator suggests the aircraft is running out of whatever it is “pumping” into the air.

Mr Nopadol laughed at the idea.

“Nobody would use a jet to spray chemicals. Normally if you want to spray something for agriculture or whatever, you fly 500 to 1,000 feet high,” he said.

“This one’s much higher. He used the zoom,” he added.

While robinhoodlum said the footage showed a plane “with no identifiable marks that flies over the island at hourly intervals from around 6 to 8am in the morning to around midday,” Mr Nopadol said they were different flights each time.

The plane in the footage was probably a Qantas flight from Europe to Australia, he added. More than 300 aircraft fly over Phuket every day. Most were long-haul flights from Australia, Singapore and Indonesia to Europe and the Middle East.

The video ends with apparent footage of the trail still visible an hour later. Text on the screen claims: “If this was condensation then it would not ‘run out’,” and, “It would also disappear quite quickly, as the heated air cools and the condensation evaporates.”

“Chemtrails. What are they, what’s in them, no idea. Does anybody even officially recognize they exist?” asks the narrator.

If Mr Nopadol and his colleagues are anything to go by, clearly not.

Phuket Perspective: Major media did poorly in the protests

Phuket Gazette Readers’ Poll: How has the crisis hit Phuket?