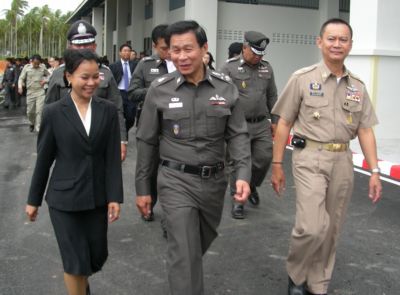 However, it turned out to be his last day as national police chief as Prime Minister Samak Sundaravej today announced his abrupt transfer to a temporary post in the Prime Minister’s Office.

When the checkpoint becomes operational, a date for which has yet to be announced, it will be open 24 hours, with full facilities including an area for Livestock Department staff to inspect vehicles transporting animals onto the island.

The checkpoint will be manned by officers from Tah Chat Chai police station and Police Region 8 headquarters, which is currently based in Surat Thani.

Gen Sereepisut also presided over the ground-breaking ceremony for work on the new Police Region 8 headquarters to be built on 185 rai also in Mai Khao. Police Region 8 comprises the provinces of Phang Nga, Krabi, Chumphon, Ranong, Surat Thani and Phuket.

Gen Sereepisut told the phalanx of high-ranking Region 8 officers at the ceremony that the 169-million-baht headquarters would be open by 2010.

“We chose Phuket for Region 8 headquarters because it is a major tourist destination and center of development for the entire upper south. We want to ensure the safety and security of all residents and visitors here,” he said.

Asked about Phuket’s serious police staff shortage, he said it was part of a nationwide problem.

Some 2,800 new commissioned officer recruits will join the force in April, following the last round of examinations, while 2,000 more non-commissioned recruits would be tested on March 2. Those who pass the exams will enter the force after training, he said.

Asked about Col Pornprasert Karnjanarin, who is under investigation for misappropriation of foreign-donated funds intended for the Thai Tsunami Victim Identification (TTVI) center, Gen Sereepisut said that Col Pornprasert’s recent resignation from the force would have no effect on the investigation.

The investigation, now in its initial stages, will continue, he said.

More evidence is being collected and if there is proof that other officers were involved, there will be further charges, he said.

The case took on international dimensions when 13 diplomatic missions who donated money to the cause requested an audit of how 99-million-baht in donated funds had been spent.

Gen Sereepisut told reporters he knew nothing about widespread rumors that his transfer to an inactive post was imminent.

As of today, Gen Sereepisut has been transferred to the Prime Minister’s Office, pending further instruction.

He has been replaced by his former deputy, Pol Gen Patcharawat Wongsuwan.

Speculation in the media about Gen Sereepisut’s abrupt transfer focuses on the fact that it comes a day after the return of former prime minister Thaksin Shinawatra, who is reportedly pushing for the promotion of his brother-in-law, Lt Gen Preowpan Damapong.