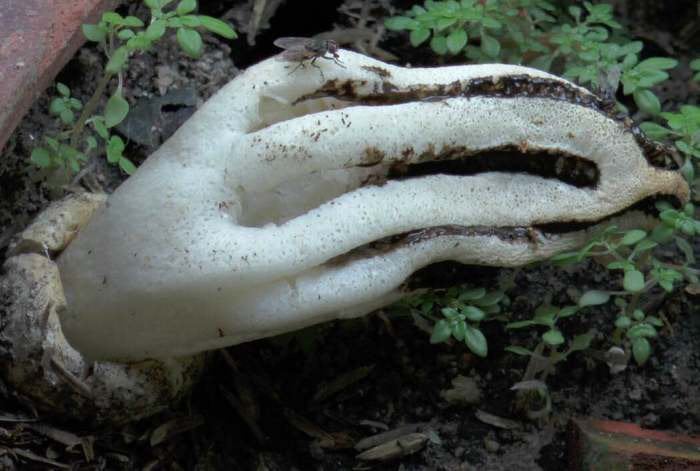 PHUKET: Locals believe that the rare ‘stinky squid’ mushroom they discovered in a jasmine pot after making merit in Chalong yesterday morning will bring them good luck.

“My family and I had just returned to from Wat Chalong, and I was watering the plants when I saw the mushroom. It looked so weird to me: it was like a squid and smelt very, very bad,” said Wichut Lakban. “There were even flies buzzing around it all the time.”

Ms Wichut sent photos of the funky fungi to the Kusoldharm Foundation, who then passed them on to an officer at the Khao Phra Thaeo Wildlife Sanctuary so it could be identified.

The wildlife officer confirmed that it was a specimen of Pseudocolus fusiformis, a stinkhorn mushroom most commonly known as the ‘stinky squid’, which is rarely found in Phuket. The strange shroom even made The Sydney Morning Herald when it was found by Melbourne Museum staff at the base of a tree fern in the building’s Forest Gallery in 2007 (story here).

“I believe that it is good luck to have this rare mushroom appearing at home,” Ms Wichut noted.