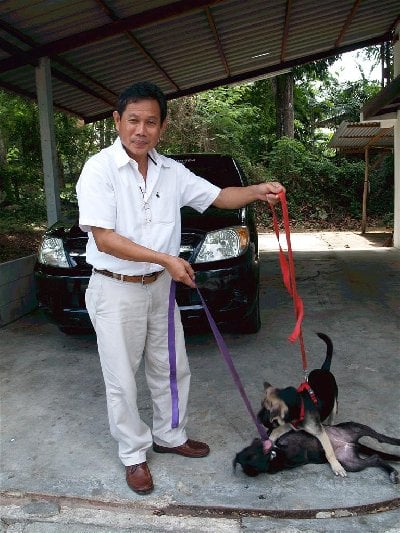 PHUKET: A pair of 2-month-old puppies are the latest addition to Phuket’s arsenal in the fight against drug trafficking.

Currently being cared for at the house of Muang District Chief Supachai Pochanukul, ‘Nin’ and ‘Chao Kuay’ will be start a drug detection course when they are six months old.

After completing five months of training at the Phuket International Dog School on Koh Sireh, the two Labrador and Spitz mix dogs, one male and one female, will join Chief Supachai’s Phuket Volunteer Security Force.

“I got the puppies from a friend to make my team more efficient. Until now we have been using manpower, urine tests and Alpha 6 substance detectors to search for drugs,” he said.

The Alpha 6 units use the same ‘molecular resonance’ technology as the now-discredited GT2000.

Despite this, some of the eight 400,000-baht units are still in use on the island and no order has yet come down for their effectiveness to be tested.

Wirote Suwansong, who heads the provincial drug suppression unit, said earlier that the Alpha 6 units are used mostly to ‘trick’ drug suspects rather than for detection.

“I think dogs will work better than any equipment or officers because of their sense of smell. I will have Nin and Chao Kuay working with me at checkpoints by this coming New Year’s celebrations,” he said.

They will join the Phuket Volunteer Security Force as regular members, but “if they work well, I will promote them to be senior members,” he added.