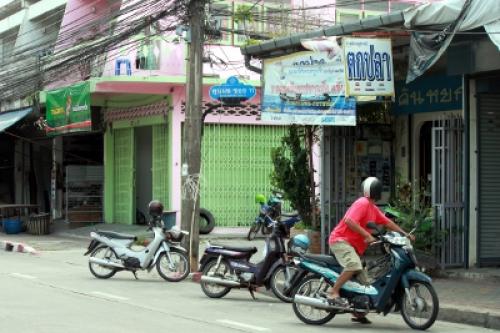 PHUKET: All charges against a Phuket police officer arrested for shooting dead a civilian in Phuket Town have been dropped.

Cpl Rachaporn Semaksorn and his brother, Dechaporn, were arrested after witnesses identified Cpl Rachaporn as the man who pulled out a gun and shot 21-year-old Ekkasit Sangangam at point-blank range.

The incident occurred on Phun Pol Soi 11, in the heart of Phuket Town’s red light district, at about 2:30am on May 5 last year (story here).

Cpl Rachaporn was subsequently discharged from the Royal Thai Police while he was facing a murder charge (story here) and Mr Dechaporn was charged with conspiracy to murder.

However, Phuket Provincial Chief Public Prosecutor Chiengsean Panhya has dropped all charges against the pair.

He declined to tell the Phuket Gazette why.

“We have decided to drop the case. We have formally reported this to Phuket Governor Maitri Inthusut for his acknowledgment, but he has yet to sign his approval and return it to us,” Chief Prosecutor Chiengsean told the Gazette.

During the seven months of investigation, Phuket City Police reported difficulty in obtaining witness statements against the policeman and his brother.

“We understand that this is a difficult investigation due to the fact that the police do not have enough information about the witnesses, not even names,” Chief Prosecutor Chiengsean told the Gazette last year.