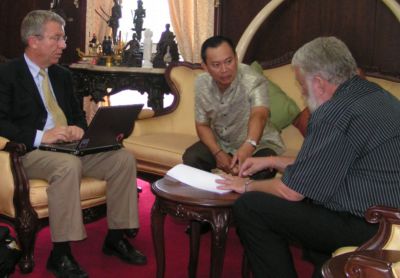 The Norwegians were just two of a host of potential investors who have been inquiring about the development, Gov Niran said.

The Norwegians’ main objective was to introduce their firm’s offshore piling technology for use in the Ao Phuket project’s marina and convention center, which might be “floating islands” affixed to the seabed.

The method proposed does not involve conventional land-reclamation techniques that require dumping sediment directly into the sea, but rather the construction of huge platforms onto which sediment is placed. This allows natural currents to flow beneath the structures and minimizes environmental impact, they explained.

Another advantage is that the structures can be built onshore then towed into place and attached to the piles, they added.

The pair also expressed an interest in investing in the project.

Gov Niran told the men he was impressed with the technology and encouraged them to make the same presentation to the board of the Designated Areas for Sustainable Tourism Administration (Dasta) in Bangkok.

They are visiting Dasta officials in Bangkok today, the Gazette has learned.

Dasta, a public organization under the Tourism and Sports Ministry, held a public hearing on the project in Phuket on May 29 and appears keen to move ahead with the 100-billion-baht plan.

There has been considerable investment interest in the project among foreign firms, Gov Niran said.

“We have been contacted by many potential foreign investors. We have already had a similar presentation by Korean firms Lotte Group and Kookmin Bank, who are interested in joint-investment in the project. With the right kind of promotion, I think we can expect more investors to show interest,” Gov Niran said.

Another firm had recently contacted the Governor’s Office to inquire about investing in a light rail project, he added.

Dasta board member Rajatin Syamananda, the driving force behind the project, recently called Gov Niran to inform him that Dasta is still studying the Ao Phuket project and looking into the idea of listing all of Phuket under Dasta as a special development zone, as requested by many people who attended the last public hearing.

“Dasta needs more time to study the issues involved and will hold more public hearings, but the dates have yet to be set,” Gov Niran said.

“Actually Phuket is still very attractive to foreign investors. I have just had a visit from one group who are going to take over a hotel in Phuket, while another group based in the Middle East also recently visited to discuss investing in a free-trade zone at Ao Makham. They first brought up the idea during the previous government,” he said.

“I think once we announce Phuket as a special zone, more projects will come,” he added.