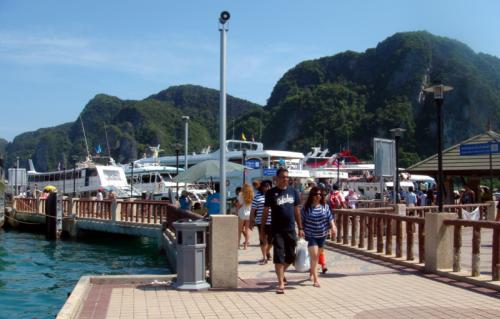 PHUKET: A Dutch woman who reported to police that she was raped on Monday while on holiday on Phi Phi Island, near Phuket, recanted her story yesterday.

The 25-year-old woman told police that she and a friend arrived on Phi Phi on Monday and checked into a hotel.

“She then went alone to a bar by the beach,” said Krabi Provincial Police Commander Nantadech Yoinuan.

“She said she got very drunk. The next thing she knew she was lying on the beach and a man was raping her. She screamed and he ran away,” Maj Gen Nantadech said.

The woman returned to her hotel, then filed her complaint with police on Tuesday evening.

“Police took her to get a sexual assault medical test,” Gen Nantadech said.

She was also tested for drugs.

Over the next couple of days, police escorted her to several locations to help her identify where the incident had happened, but she was unable to remember the location or what the man looked like.

“We have very little information to go on. The victim cannot recall the suspect and she does not know where she was raped,” Gen Nantadech told the Phuket Gazette.

“We are starting from the last place she was drinking so we can check the CCTV footage and move on from there,” he added.

The results of the sexual assault tests did not indicate that she had been raped, police told the Gazette yesterday. The drug tests take several days to process and are not yet available.

The woman’s inability to remember where the incident happened, along with the test results, caused her to start doubting herself, police said, and yesterday she retracted her complaint.

Following a spate of sex attacks being reported in the tourist-popular area five months ago, Krabi City Police Chief Thaksin Phochakorn admitted to the Gazette that the recurring issue of rape and sexual assault was starting to take its toll on his officers (story here).

“I would like to warn tourists to please be aware that once you start drinking, a situation can become more dangerous due to the effects of alcohol,” he added.

Phuket Sports: Rotary Club of Patong paired up with Laguna for fun in the sun

Phuket Poll: Time to round up the dogs?