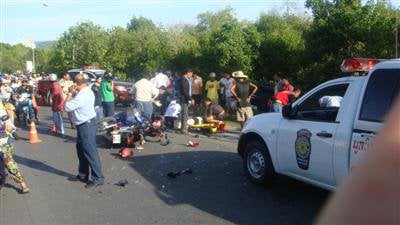 PHUKET CITY: A 30-year-old man tested five times over the legal alcohol limit after smashing his truck into an oncoming pickup, scattering seven motorbikes and their passengers across the road.

Nakhon Sri Thammarat native Wirot Songpan was driving his black pickup truck home at rush hour on the morning of May 19 after a night of drinking in Saphan Hin park when, at about 7:20am, he lost control of his vehicle and crossed lanes, crashing head-on into a pickup truck on Sakdidej Soi 1 in front of the mangrove forest education center.

The collision sent the other truck spinning into seven motorbikes, while Mr Wirot’s pickup careened off the road into the mangroves, leaving behind a trail of devastation and a large, rush-hour traffic jam.

Eleven people were injured in the pile up, including four children, two of whom were 4 years of age.

Phuket Provincial Police Commander Pekad Tantipong said, “Even though we have campaigns against drinking and driving all the time, there are still people who ignore them. I would like people to see what happened here and how much damage was caused to remind themselves of the dangers involved.”

Two of the accident victims suffered serious injuries, one with a broken leg and the other with internal injuries.

Phuket City Police superintendent Wanchai Ekpornpit added, “Luckily, some of the victims were wearing helmets; If they hadn’t been, we would have seen much more serious injuries.”

At a press conference yesterday, police said Mr Wirot was arrested at the scene and charged with drinking in a public park, reckless driving resulting in serious bodily injury, and drunk driving.