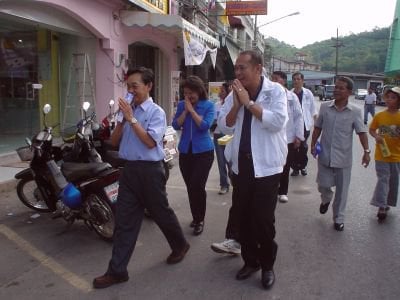 PHUKET CITY: Former Prime Minister Chuan Leekpai and other Democrat Party leaders went walkabout and attended a rally at Saphan Hin on Saturday to support Anchalee Vanich-Thepabutr’s bid to win the presidency of Phuket’s Provincial Administration Organization (OrBorJor). Among others in attendance at the walkabout and rally were current Democrat Party leader Banyat Banthadtan and senior members Trairong Suwankiri and Suthep Theuksuban. K. Banyat said he had received gratifying feedback from the public regarding K. Anchalee. It appeared, he said, that her goals of developing both tourism and education in the province had resonated with the people. “It should be good news for Phuket that a politician with so much experience at the national level is now coming down to run for office at the provincial level, especially since Phuket plays such an important role in Thailand’s economy,” K. Banyat added. Former PM Chuan denied that K. Anchalee’s decision to run in the election was part of a political strategy by the Democrats to protect their traditional support base in the south, but rather is intended to provide a qualified administrator with the chance to help her home province. Formerly, K. Anchalee served as a “party list” or unelected non-constituency MP. Under the Thai parliamentary system, each party is allowed a certain number of party-list MPs based on the number of elected MPs it has. With the ascendancy of the Thai Rak Thai Party (TRT), however, the Democrats have seen their party-list allotment shrink. The Democrats framed the OrBorJor poll as a clear choice for local citizens between having a voice in government and allowing all power to be sucked in by Bangkok. “If we have honest administrators, a greater proportion of the overall budget will go back into local development,” said K. Chuan. The former Premier recently went on similar door-to-door vote-seeking excursions to support Democrat candidates against TRT rivals in elections in Songkhla. One candidate was running in a national by-election and the other for Mayor of Haad Yai municipality. Both won handily in what many see as a rejection of Thai Rak Thai’s stated target – to win 400 of Thailand’s total 500 parliamentary seats in the next parliamentary election, scheduled for early next year. During the rally that followed Saturday’s walkabout, K. Anchalee explained that her reason for running for election was that she could no longer ignore Phuket’s problems at a time when the Thai Rak Thai party was consolidating its top-down system of governance though its CEO Governor program. She said that winning the OrBorJor poll would be a good first step toward ensuring that local people still have some voice in government. An Anchalee aide estimated that as many as 30,000 people attended the rally, though a local police official said the number was far lower. Perhaps in reaction to the upwelling of Democrat enthusiasm, independent candidate Wisut Santikul held a press conference the same day to deny rumors he was affiliated with Thai Rak Thai. He said that although he felt local and national politics should remain separate, he explained had been a registered Democrat since 1986, when he helped establish the party’s Phuket branch.