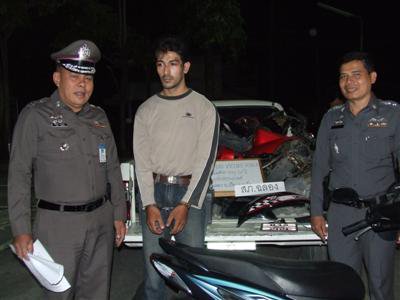 PHUKET CITY: While motorbike theft is a common crime in Phuket, the perpetrators are typically students of local vocational schools – not graphic artists from a country whose people are better known for their skills at soccer than thievery.

A press conference at Phuket City Police Station late last week proved once again, however, that when it comes to crime few places are more cosmopolitan than Phuket.

Videla was arrested by Chalong Police just before 2 am that day, Thursday, after officers patrolling the Chalong Pier area saw him pushing a Honda Click motorbike with no registration plate along Chao Fa East Rd.

Noticing that he was wearing a crash helmet and backpack and “acting strangely”, police approached him in front of the Y Connection shop for questioning.

Rather than stand and account for his behavior, the Argentinian fled on foot into the nearby Soi Thanuthep.

He was caught and eventually subdued by the officers, but not after a struggle that resulted in his sustaining some minor head wounds.

Once incapacitated, Mr Videla was found in possession of two license plates – the one from the bike he had just stolen in front of Jimmy’s Lighthouse and another he admitted to having grabbed off a Honda Dream parked in front of the Chalong Dental Clinic.

The Argentinian was then taken to his residence off of Soi Yodsane, where police uncovered the chassis and other parts of a disassembled motorbike together with a license plate, motorbike keys and a variety of tools and knives.

At the time of his arrest, Videla, who holds a work permit, was employed as a computer graphics artist at a salary of 30,000 baht per month, police said.

While many foreign criminals are denied bail, the court must have given a break to the Argentinian, who was spotted by Gazette staff at the Phuket Airpark Fly-in celebrations over the weekend – which raises a question as to why the court didn’t rule that he was a “flight risk”.

Australian sentenced to 3 years in jail