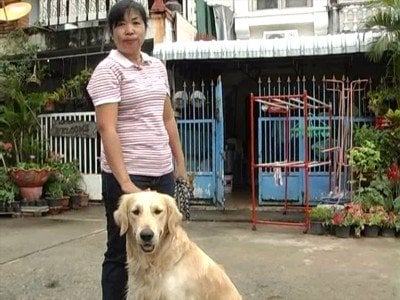 KHON KAEN: A gang of dog snatchers is stealing pampered pooches in the northeastern city of Khon Kaen, leaving a string of dog owners devastated over the loss of their cherished four-legged friends.

The gang, whose reign of terror has lasted two years, is targeting pedigree breeds with placid temperaments, such as golden retrievers, Siberian huskies, chihuahuas, Pomeranians and pugs.

The gang uses pickup trucks to catch large dogs, waiting until their owners aren’t paying attention before scooping the unsuspecting hounds into the vehicle.

Smaller dogs are grabbed by men riding pillion on motorcycles.

Internet forums and social networking sites are full of “missing” announcements for cherished pets – but most of the dogs are not seen again.

Sometimes, when owners have offered rewards for the return of their dogs, the gang has given them back – for cash.

Chumporn Para, owner of the Khon Kaen Link website, said messages about stolen dogs were increasingly being posted on his web board.

“The victims don’t tell the police because they’re afraid it’s a silly thing,” he said. “The police have a lot to do. They probably don’t have time to go looking for dogs, so [the owners] turn to social media instead.”

Chomsurang Namphrom lost her eight-month-old pedigree pug “Jokey” to the dastardly gang. She said he had been sired by an Isarn (Northeastern Thailand) champion showdog and cost her 4,000 baht.

With tears in her eyes, Chomsurang explained how much she loved Jokey, how she had treated him like her own child, how they used to eat together… until the dog snatchers struck.

A friend took Jokey out for a walk, letting him play by Khon Kaen lake, but while her back was turned three young men pulled up on a motorbike and swiped him.

She received a call from a person claiming to have bought Jokey from some young men.

The person said Jokey would be returned, but only if the reward were paid.

But when the voice asked if the police had been notified of Jokey’s disappearance – and Chomsaruang confirmed they had – the person hung up. That was the last she heard from them.

“I still can’t accept it because I loved him like a child,” she said.

“I still keep his toys and clothes for him. When I miss him I write messages to him under photographs of him. I say ‘I miss my child so much’.

“I’m waiting for the day my child comes back to me. Now I can’t think of replacing him with another dog because I still love and wait for Jokey,” she said.

Ayutthaya “sex lottery’ exposed, cops get tough on getting lucky