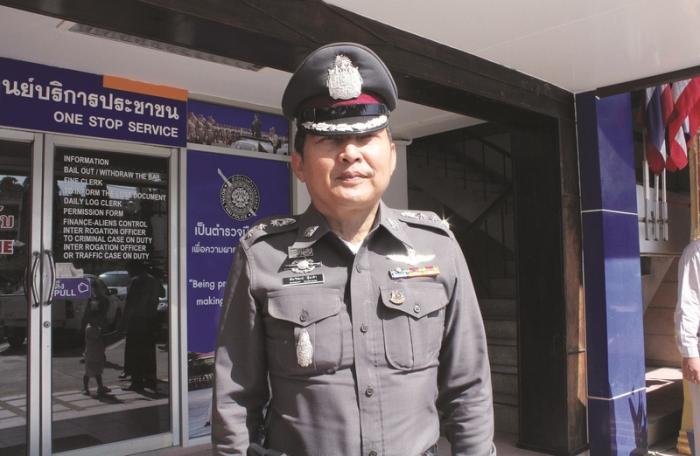 PHUKET: Col Chaiwat Auikam, originally from Saraburi, is currently the superintendent of Patong Police Station. He assumed the role two years ago. Col Chaiwat has been working as a policeman for more than 27 years. He graduated from the Armed Forces Academies Preparatory School and Royal Police Cadet Academy.

Here, he talks about the current project to improve safety measures, especially for tourists, in Patong.

Patong is one of the most popular areas of Phuket. Countless tourists visit and many locals work here as well.

Within a 16 square kilometer area, we have more than 300 hotels and resorts, as well as more than 500 nightlife venues. On average, including both tourists and locals, we have more than a million people entering the Patong area per month. That makes it quite difficult for us to monitor and control.

Being a popular tourist area has both its advantages and disadvantages. The high number of tourists boosts the economy and helps develop Patong. On the other hand, more people also means more crimes are likely to be committed.

As per last year’s statistics, Patong had more than 4,121 complaints filed, which is quite high compared to other areas. Most of them were drug cases, while assault cases also ranked high on the list.

In order to fight crime, we have to work hard and maintain close vigilance.

This year, there are 16 safety projects planned to improve safety in Patong.

The first project is Pan Ta Soparot, meaning ‘thousands of pineapple eyes’. As you know, we have a limited budget to install CCTV cameras. Therefore, we will ask for help from hotels and nightlife venues in the area. If each of them installs at least one CCTV and turns it around to face outward, there will be more than 800 public CCTVs in Patong. So, if a crime is committed, suspects are less likely to escape unnoticed.

This project benefits everyone. The private sector only has to spend a small amount of money, but it brings long-term benefits for everyone. It will also make tourists and locals feel more secure.

The second project is Puen Baan Tuen Pai (neighborhood alert). This is for high-risk areas where there aren’t many people or CCTVs, as well as areas with a high crime rate. To deal with such areas, we will assign special officers to keep a closer lookout and patrol more often.

The third project, which is already in action, is called Tat Mue Tat Thao (cut hand, cut foot). ‘Hand’ refers to the firearm or weapon used to commit a crime, whereas ‘foot’ refers to the vehicle used in any incident. We are working diligently on this one and have set up random check points in the Patong area, with at least three checks a day. Last month, we arrested drivers of at least 20 vehicles without plates and confiscated more than 100 weapons, such as knives, axes, swords and others.

The police cannot do everything alone; we need help and cooperation from locals. For this purpose, we have a project called Jai Prasan Jai (heart to heart) to connect locals from different communities and build a good relationship between them and the police. We will have frequent meetings with local representatives to hear out problems and discuss solutions.

These are just the projects that were launched this month. However, there are still many others, such as 100 per cent helmet use, traffic control, encouraging negotiations rather than sending an issue to court, and regular checks on hotels and nightlife venues, among others.

Another important project besides these is to get rid of bribery. If police keep receiving bribes, there will never be a change. We are working to make Patong Police as transparent as possible.