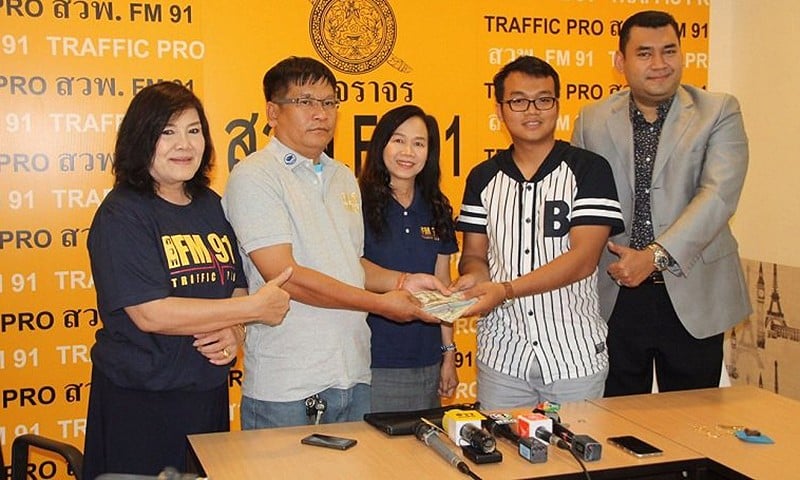 The Nation is reporting that a Bangkok taxi driver found cash worth 270,000 baht in Thai, Cambodian and US banknotes in a handbag at the weekend and handed it over to a radio station, which later managed to locate the Cambodian owner and return it to him.

The passenger, 24 year old Op Simony Odum, got the money back from the Traffic Police FM91 radio station in Lat Phrao district on Monday morning, and gave a cash reward to the taxi driver.

42 year old Rawee Thongbor says he had delivered several passengers on Sunday night, after which he found the bag inside his cab but was unsure which of them it belonged to. He therefore contacted the radio station asking for help in locating the owner.

At 8pm, he had driven a man and two women from Lat Phrao to the Ratchaprarop area, and then picked up two Chinese passengers and drove them to a spot on a road along the Ram Indra-Art Narong expressway.

He later found the handbag in a small space between the front passenger seat and the door when he stopped to fill his tank with gas at 10pm. Rawee said he had seen a man in each of the two groups of passengers carrying a handbag, but the bag that one of them had left behind did not contain any ID card or other identification document.

Read the rest of the story from The Nation HERE.