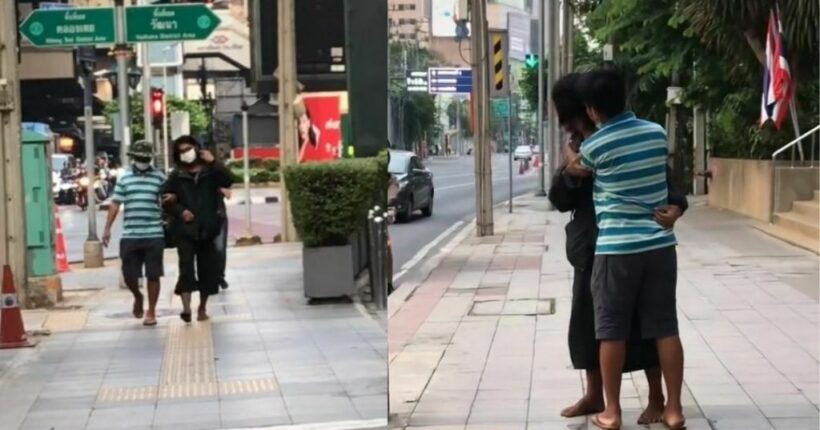 A young homeless man in Bangkok was reunited with his family after a motorbike taxi driver shared a video of the man on social media. The driver said the homeless man in the capital’s Asoke area was “handsome, just like a Chinese leading actor.” The video went viral on Thai social media, reaching the man’s family. His father travelled to Bangkok to pick up his son.

The motorbike taxi driver, Chaiyoot Kasron, often records videos of homeless people in the city and posts them on TikTok so families looking for them can find them. He’s posted several videos of the young homeless man over the past month. He said the man was friendly and looked good even though his hair and clothes were messy. He added that the man seemed to have a mental disorder, but could communicate well sometimes.

He said that the videos of this man were the most popular compared to other homeless videos with tens of thousands of views. The father of the homeless man contacted the motorbike taxi and travelled from southern province Prachuap Kiri Khan to bring him home. The rider also posted videos of father and son hugging each other at the first met.

Thai media shared that the homeless man was admitted to the psychiatric hospital Srithanya Hospital. The doctor asked him to stay for treatment for at least two weeks.

DoUKnowWhoIAm
24 minutes ago, Thaiger said: handsome, just like a Chinese leading actor. This is the only Chinese actor I'm familiar with.

PapayaBokBok
Some guy walked up to me tonight and thought i was someone else I said I get the Brad Pitt thing almost daily---esp from the loy kroh massage grannies!!