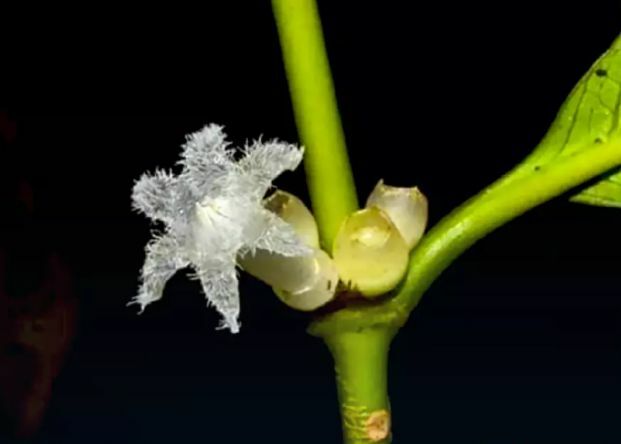 A new flower was reportedly discovered at a national park in the southern province of Ranong. The white star-shaped flower with six to seven points was named the “Cute Star Flower,” or “Dara Pilas” in Thai. The flower was found at the Ngao Waterfall National Park.

Thailand’s Department of National Parks, Wildlife and Plant Conservation announced on its Facebook page that the United States’ PeerJ journal acknowledged the newly-discovered plant under the scientific name Lasianthus ranongensis Sinbumroong & Napiroon. It was named after forest specialist for the Department of National Parks, Arun Sinbumroong, and Dr Thiewthawat Napiroon of Biotechnology Department at Thammasart University.

According to Nation Thailand, the flower is rich in Scopoletin, which is used in traditional Chinese Medicine to treat rheumatic arthritis.

The Department of National Parks, Wildlife and Plant Conservation says the department and a “research team are looking into ways of multiplying this plant in the areas, possibly by using biotechnology.”

palooka
1 hour ago, Paco said: Time to place boards around that flower, for when the Chinese come... do not touch, do not eat it Solly no speak english thai or any language, need flower.

JamesE
"The Department of National Parks, Wildlife and Plant Conservation says the department and a 'research team are looking into ways of multiplying this plant in the areas, possibly by using biotechnology.' " Why does this give me a Little Shop…