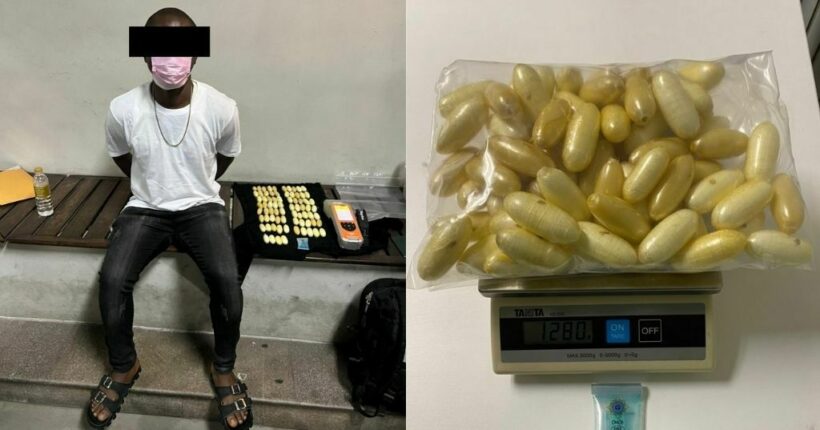 Thailand’s Customs Department seized 1.28 kilograms of cocaine from a man at a quarantine who had just entered the country from Guinea Bissau. Authorities suspect the man may have ingested the packages drugs as a way to get passed security at the airport.

The 41 year old man from Sierra Leone arrived at Bangkok’s Suvarnabhumi Airport on February 12. He was already under the radar of Thai authorities and the Customs Department was notified of his arrival. Officers at the arrival gate searched his bags, but did not find any illegal drugs.

Officers then continued to monitor the man and went to the quarantine hotel he was staying at when he was checking out on Tuesday. Officers searched his bags and found 74 small packs of cocaine hidden in his backpack. They say the drugs have a street value of 3.8 million baht.

riclag
Click comment link from the falang with 1.2 kilo of ya ba comes to the fake monk thread ! come on tiger , you can do better! edit ! Sorry just noticed someone already covered this
TSS
man, the photo of the those cocaine packets. Customs didn't find anything in airport search, but found them the next day. Musta been in another carry on🤯

Guest1
18 minutes ago, TSS said: man, the photo of the those cocaine packets. Customs didn't find anything in airport search, but found them the next day. Musta been in another carry on🤯 Not the next day but(t) after 10 days…

palooka
My understanding of giving monks money is that: They should not ask for money directly, unless at the temple, generally monk day, and it is mentioned in front of the congregation that money is needed for whatever, usually made by…

Pattaya woman allegedly smokes meth in laundromat, tries to get police to join her