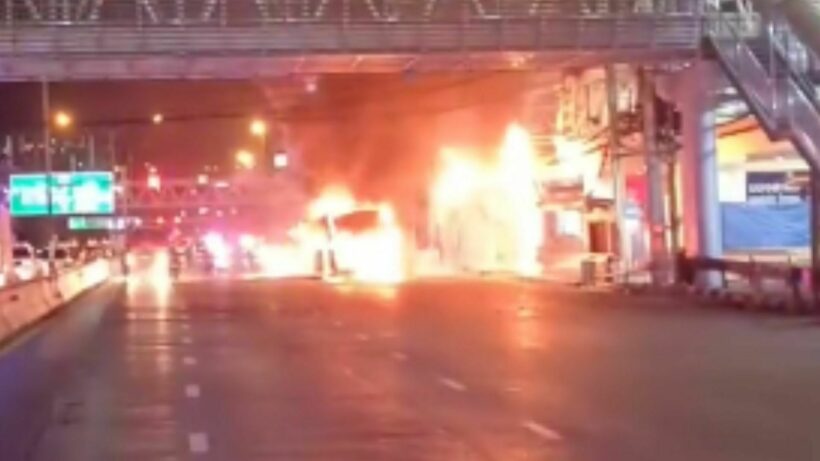 A woman suffered burns to her arm as passengers fled a blazing bus outside a busy shoppin mall yesterday evening.

The airconditioned and gas-fuelled bus caught fire in Nonthaburi, northwest of Bangkok, due to a failed brake system which lead to it overheating, according to the Bangkok Mass Transit Authority.

Around 30 passengers fled the blaze but, unfortunately, one female passenger suffered burns to her left arm and was sent to Paolo Hospital for treatment.

Rescue teams, police officers and firefighters all dashed to the scene, where it took almost half an hour to extinguish the fire. The bus and around 50 metres of nearby power and communication cables were completely destroyed by the blaze.

The bus driver says he heard a bang at the back of the bus and parked in front of a shopping mall in Ngan Wong Wan, Pantip Plaza. He asked passengers to exit the bus as quickly as possible after he saw a fire coming from the rear right wheel. The driver tried to put out the blaze with a fire extinguisher but it engulfed the bus too quickly and he too had to flee the scene.

A BMTA inspection of the fire-damaged vehicle discovered that a brake system failure caused the brakes to stick and overheat.

Cho Thavee, the company in charge of repairs and maintenance, has been tasked with resolving the situation. They claimed brake pads are replaced every 60,000 kilometres, but with Thailand entering the wet season, the brakes rusted when they were exposed to water, causing the brake system to stick.

The BMTA advised Cho Thavee to increase inspections on its vehicles’ engines, electrics, and braking systems, to avoid any similar incidents from happening again.