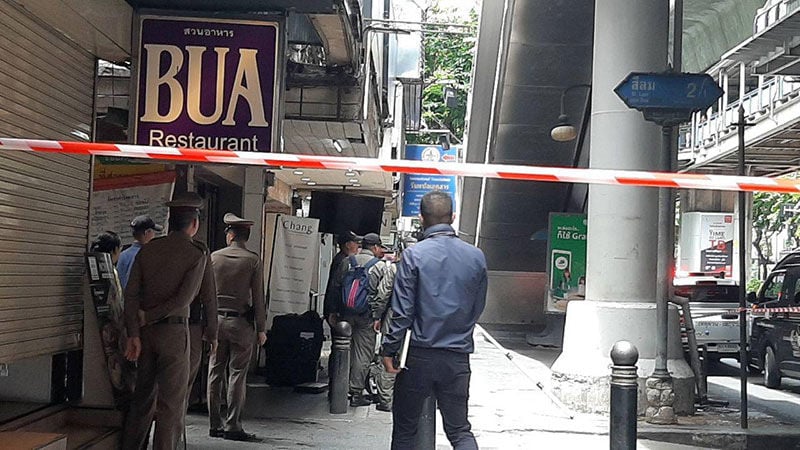 A meeting of Thai security and intelligence officials last night, chaired by Deputy PM Prawit Wongsuwan, has determined southern insurgents were likely behind the spate of ‘warning’ bombs that went off around the capital yesterday morning. At the same time they haven’t completely ruled out political motivations despite an attempt by Thailand’s army chief Gen. Apirat Kongsompong to politicise the day’s explosions.

The blasts included one at Chong Nong Si BTS station, next door to the Mahanakhon building, the Government Complex on Chaeng Watthana Road (Building B), and the Royal Thai Armed Forces HQ.

The series of bombings injured four people, although it is understood that no one was seriously injured. All four are currently receiving in hospitals.

The national police chief Chakthip Chaijinda says an initial police investigation indicates that there are similarities between yesterday’s bombings and attacks carried out in seven southern and central provinces, including Phuket, in August 2016.

The police chief says that authorities “can bring the situation under control”.

Seven separate bombs were reported in five locations in Bangkok and Nonthaburi with five of them detonating, injuring four people. Fires also broke out at three locations – Bangkok’s Pratunam market area on Phetchaburi Road, a favourite tourist and local shopping destination. One fire is suspected to be arson and bomb fragments were reported to be among the debris. 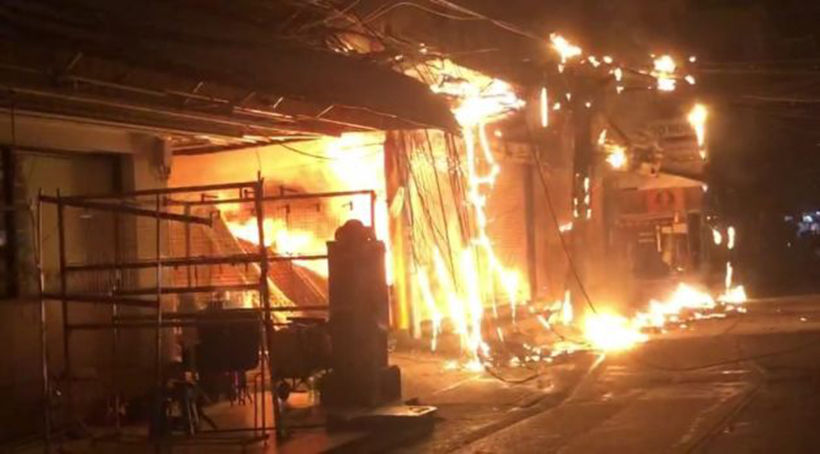 Sources report that bomb disposal experts say the bombs at several locations in Bangkok were “improvised devices” triggered by timers.

“They were designed to cause panic rather than inflict mass casualties. These bombs are similar to cluster bombs used in the serial bomb attacks in seven southern and central provinces on August 16, 2016.”

The timing of the incidents, during a meeting of regional foreign ministers at a series of ASEAN meeting, running since Tuesday, support the theory that the incidents are more about embarrassing the government and security forces rather than causing damage or harm. Ministers and officials from 31 countries were in attendance including US Secretary of State, Mike Pompeo. 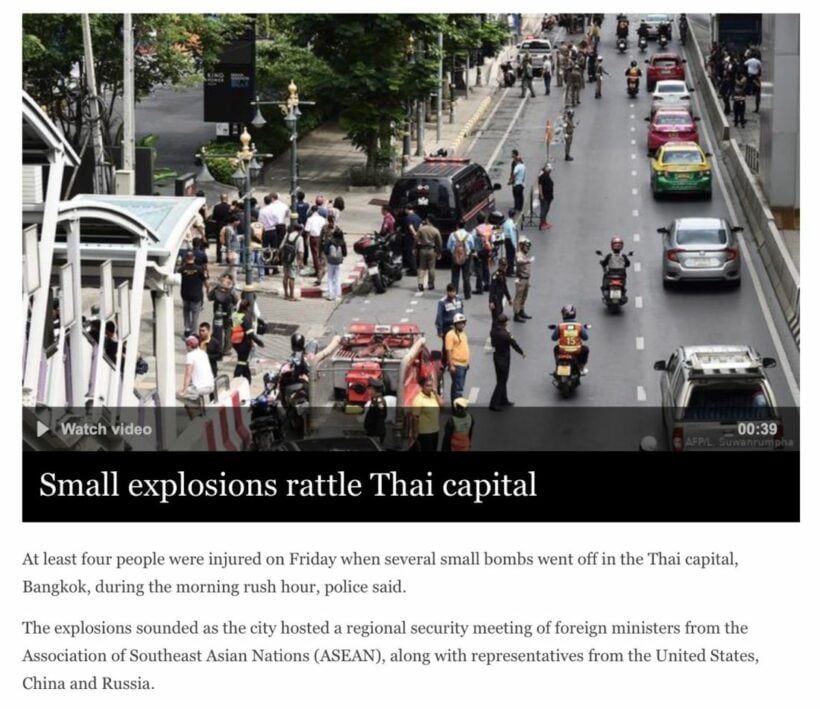 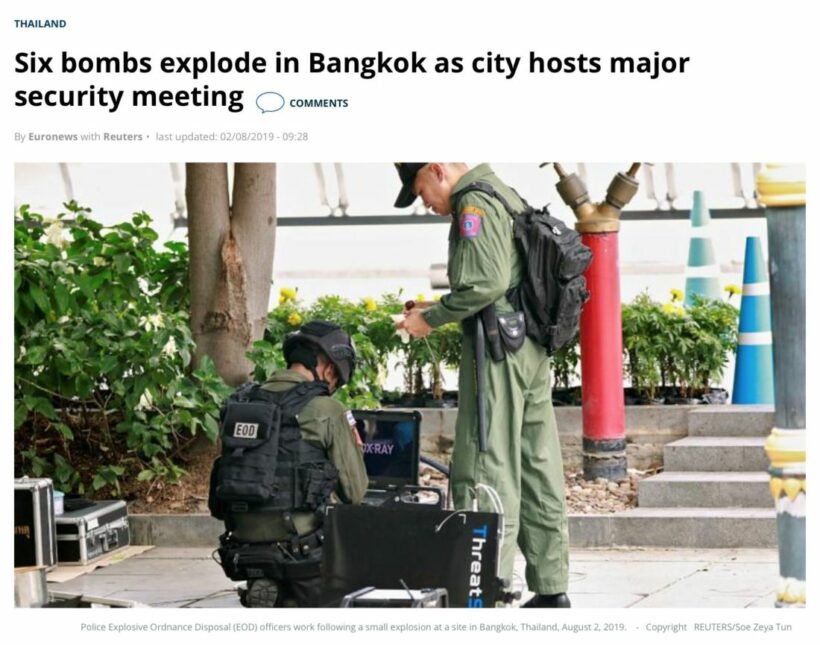 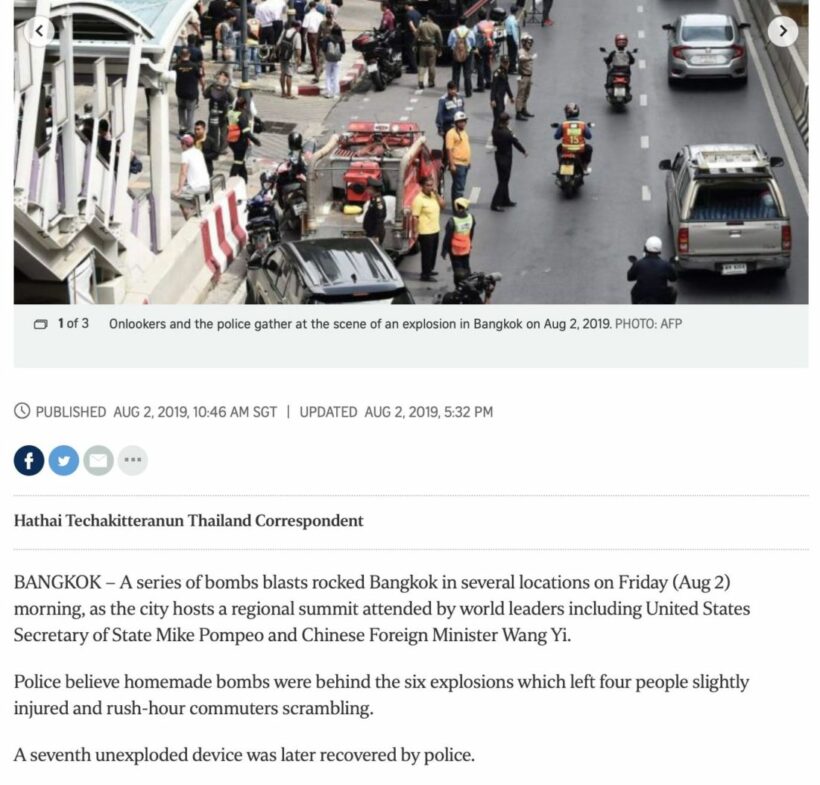 Security was tightened around the Centara Grand at CentralWorld, near to where the ASEAN meetings were under way. At a Friday evening meeting between defence and security officials, chaired by deputy PM Prawit Wongsuwan, officials didn’t rule out any motives behind the bombings saying “that the attacks were intended to damage the country’s reputation”.

Thailand’s Foreign Affairs Minister Don Pramudwinai says that the bombings had not affected the ASEAN meetings and the event proceeded as per schedule.

All calm in Bangkok following Friday morning’s spate of explosions