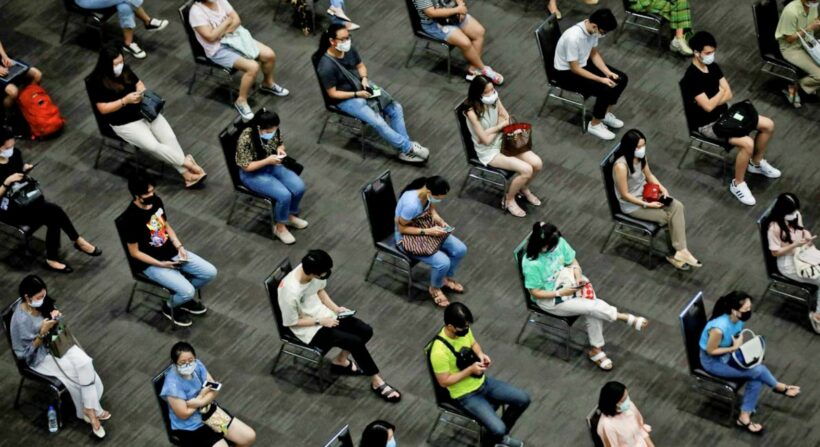 For Sunday the public health department have announced another 3,995 new infections and 42 Covid-related deaths. Only 45 more cases were detected in Thai prisons, a sharp drop off from a few weeks ago when the daily cases from prisons were in the 100s.

The main outbreaks around Thailand are occurring in the capital, adjoining provinces, and provinces directly to the east (including Chon Buri), southern Thailand, principally in the deep southern border provinces. Even Phang Nga, directly north from Phuket, recorded 38 new cases yesterday.

Today’s announcement of provincial totals will be published after lunchtime.

• Today and tomorrow the vaccine roll out continues in earnest in Phuket at 6 vaccine locations around the island. The southern tourist island is poised to re-open to vaccinated travellers from this Thursday.

• After the government announced yesterday a one-month closure of construction camps, the Federation of Thai Industries and many other business associations complained that the action was too weak. The FTI and other business groups believe that a full lockdown is necessary to control Covid-19 outbreaks in Bangkok and half-measures like this are ineffective at best.

The Thai government announced new restrictions for Bangkok, Nonthaburi, Pathum Thani, Samut Prakan, Samut Sakhon and Nakhon Pathom which start tomorrow and continue for at least 30 days. The new restrictions basically wind back a recent easing of restrictions around the capital. But the new restrictions now apply for the adjacent provinces as well.
• No in-house dining at restaurants
• Gatherings of more than 20 people are banned
• Shopping Centres closed at 9pm

Many business groups expressing frustration over the government’s failure to bring the Covid-19 pandemic’s third wave under control in Thailand and botching the vaccine roll out which has been hampered with inadequate supplies.

Meanwhile thousands of labourers and other migrant workers are being ‘locked down’, virtually imprisoned in their high density housing zones as officials try and quell the clusters of outbreaks around the capital.

• The Equitable Education Fund has announced that school dropout rates in Thailand have increased as the new semester begins, and found a correlation with households economically affected by Covid-19.

The EEF said education has become unaffordable for many families, given the impact of the virus, as new groups are suddenly living in poverty. 10% of students are not returning to school with dropout rates continuing to rise.

ozvenision
7 hours ago, triplebogey said: That is an unfair comparison there is no vaccine for stupid There is also no vaccine for IN ACCURATE numbers which always the case here regardless of traffic or covid reporting .. ;)

AdvocatusDiaboli
6 minutes ago, ozvenision said: There is also no vaccine for IN ACCURATE numbers which always the case here regardless of traffic or covid reporting .. ;) No, but they learn how to report correctly by first training in the Tourism…
Bangkok_Gary
4000 new cases of Covid a day, with hospitals nearly full, and they expect foreign tourists to come pouring in ? There is a major outbreak of delusion in Thailand.
ken
seems situation getting serious, wonder why no postponement on visa extenstion and 90 day report for expats as before when the situation is much less severe?
Joe
Chonburi's governor/administrator should resign. Horribly bad job! No excuse for the large number of cases! They also refused to disallow Bankok people for coming in spreading the virus! It is like no one is in charge with any brains! Sad!