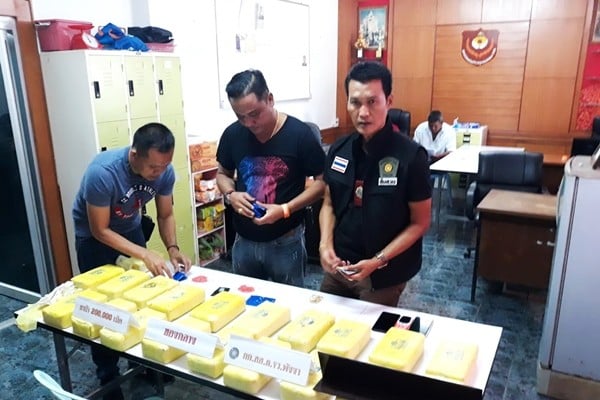 Four people have been arrested with more than 200,000 methamphetamine tablets.

Two suspects are 46 year old Praiwan Jantarod and a man name only as ‘Dam’, aged 18 year old. Both are from Phang Nga. Police seized 39 methamphetamine pills.

The Phang Nga Provincial Police Commander Col Eakkawut Sanaepohn says, “after we arrested those two suspects we continued the investigation. This led to two more suspects being arrested – a 25 year old man Issaduerae Buetoe from Pattani and a woman, 23 year old Nannapat Sama.”

“They were found with 200,000 meth pills inside a pick-up truck. They have been taken to Phang Nga City Police Station for further questioning.”

”Prawn, who had been arrested on June 27, told us that he bought methamphetamine pills from his network for 20,000-40,000 baht times. He has bought about three times so far. Drugs are delivered via car.”

“They say they’ve also been hired to transfer drugs to Hat Yai in Songkhla, and Pattalung many times. Each time they claim they are paid 30,000 – 50,000 baht.” Options and opportunities – getting the football team out of the caves

Chiang Rai: A long and winding rescue ahead