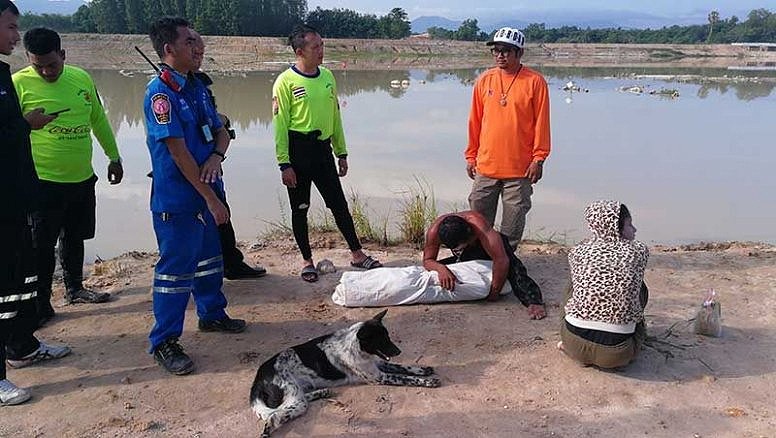 A faithful dog has led a family of a missing five year ld boy to a Songkhla reservoir. Sadly, it turned out that the youngster had already drowned.

The body of Panattha Thammaro resurfaced at about 8am this morning (Friday).

The family said the boy disappeared from home at 3pm Thursday and couldn’t be found. Then at 8pm the dog, named Diew, returned home soaking wet and with red eyes, anxious but looking exhausted. Diew led the family to a trail of Panattha’s footprints along the edge of the Nam Phru Plee Kwai Reservoir in Moo 2, Na Mom district, about two kilometres from their home.

Rescuers searched in vain throughout the night, with the dog pacing back and forth at the spot the boy is believed to have fallen into the water. When the body resurfaced this morning, Prasert Thammarai, the child’s father, swam out to retrieve it. Officials believe the boy accidentally fell in while running with the dog, which then attempted a rescue on its own, perhaps repeatedly.

Panattha’s aunt, who asked not to be named, said the dog and the boy grew up together and were best friends. The family said Diew first tried to block the vehicle taking Panattha’s body to hospital for a post-mortem and then ran after it for a distance.