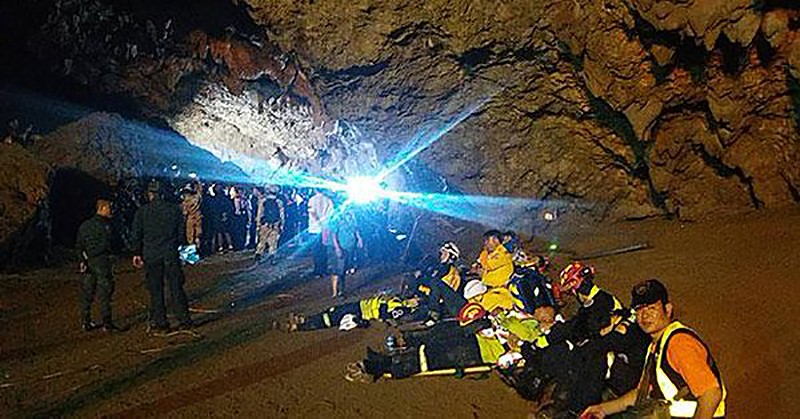 The desperate search continues today for 12 children and their coach from a local football team who went missing in a Chiang Rai flooded cave on Saturday afternoon.

Rescue teams will search to the end of the limestone cave that is believed to be the fourth longest cave in Thailand. So far, searchers have found children’s slippers, footprints and palm prints on the wall of the cave.

Rescue teams have pumped water out of the cave into a nearby reservoir to assist divers led by Thai Navy’s SEAL unit. For the past three days divers have searched through muddy waters as levels have risen following heavy rains.

They have drilled the cave’s walls into two separate halls as part of the ongoing search at Tham LuangKhunnam Nang Non National Park.

It’s also been reported that electricians are extending a power line into the flooded cave. Rescuers led by elite navy divers were forced to suspend their search Monday night due to flooding but started again early today (Tuesday).

The missing children, aged between 13 and 16, are members of the local football team, the Mu Pa Academy Mae Sai football club.

The teenagers went into the cave with the team’s deputy coach, 25 year old Ekkapon Intawongse, as part of their training. They had food, water and first aid kits.

The team’s head coach, Nopparat Kantawongse says that this was the third time the team had made the trip into the cave. He said he was confident that Ekkapon would take good care of the children because he is part of the medical staff for the team.