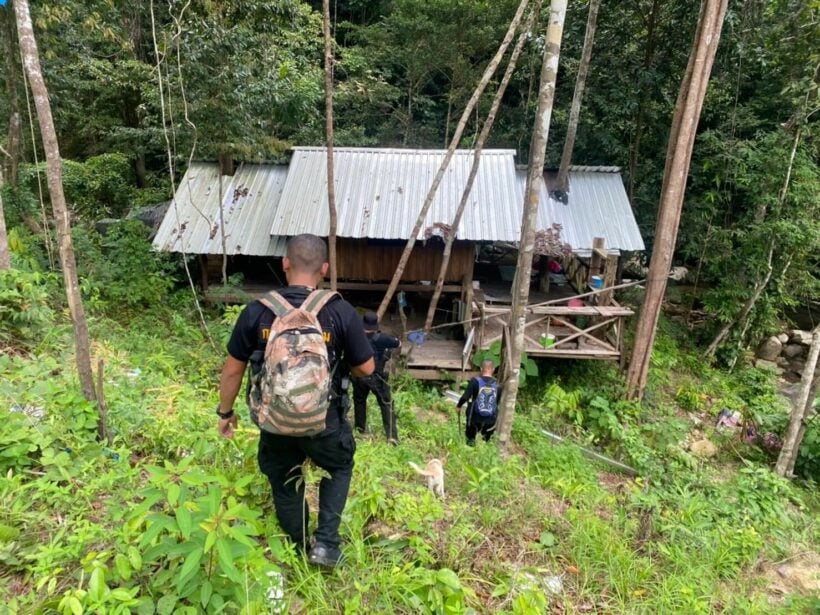 The alleged hitman who evaded arrest after shot an M16 rifle, killing an officer during a highspeed chase, has reportedly fled from police again. The man, who is on Thailand’s most wanted list for multiple charges involving murder, is believed to be hiding out in a forest on Khao Cao Mountain in southern province Songkhla. A team of more than 100 authorities have been trying to track down the suspect and have come across a camp, and most recently a hut where they believe the alleged hitman has been hiding.

Earlier this month, suspected hitman Chamrat “Chui Chaochan” Rakchan allegedly fired an M16 rifle at officers during a police chase. One officer was shot in the head and later died at a hospital. Another was shot in the arm. Chui and two other suspects were able to stop the car and run from the scene, while another suspect was not able to flee in time and was shot in a confrontation with police.

The suspects were believed to be in hiding in a forest on Khao Cao Mountain. A team of more than 100 officers have been searching the mountain. One suspect, 27 year old Kriangkrai Chaiyapoon, has since surrendered to the police while the other two, including the alleged hitman, are still at large.

The suspect told officers that the other two men were still hiding in the forest. Officers came across a camp and later found a hut. No one was at either scene when officers arrived. The hut was around 5 kilometres far from the camp. Inside, officers found instant food, fruits, and bedding sets. The officers seized everything as evidence and are discussing their next plan of action.

ThailandBob
The headline reads as if the police were looking for the guy and found him on the most wanted list.
oldschooler
so no evidential link then between some random remote abandoned campsite and this guy ; just some claimed “beliefs” and need to convince boss they are “ making progress” on this high profile “glamorous” case. A complete non-story.