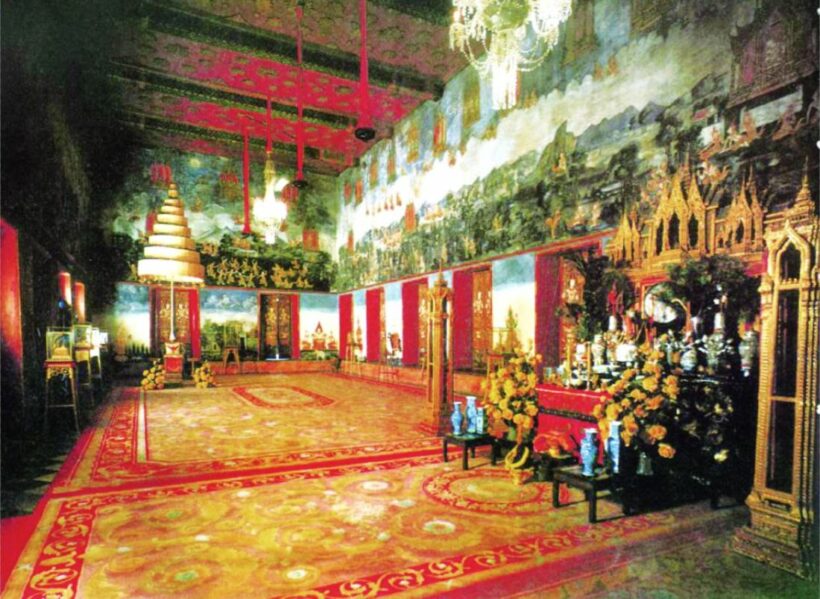 The historic Coronation of King Maha Vajiralongkorn this weekend will be based on long held traditions that were included in coronations of the preceding nine Kings of the Chakri Dynasty since 1782.

Three halls in the Phra Maha Monthira section of the Grand Palace will be used for the royal coronation.

Off limits to the public, the Phra Maha Monthira halls are located within the inner sanctum of the Emerald Buddha Temple and the Grand Palace.

These halls were built on the site where King Rama I first built a temporary palace upon assuming the throne and establishing the Chakri Dynasty in 1782.

The structure and pattern, including the interior of these halls, follow traditional design and convey the heavenly status of the king in line with the cosmological beliefs described in the Tribhumikatha scriptures written by Phra Maha Dhamma Raja I (Lithai) of the Sukhothai era. The exteriors are no less magnificent, with each set of the layered roofs boasting decorative rakes called Krieung Lam Yong, Chofah and Hang Hong. The roofs are lacquered and decorated with a mosaic of coloured glass in green, orange and yellow.

The Phra Maha Monthira group of royal halls  are marked with distinctive roofs, with tiers telescoping outwards, with decorated pediments featuring undulating Nagas on its gables, and chofa at the apex.

Royal ceremonies during the reign of King Rama I initially took place in the Indra Bhisek Maha Prasad Throne Hall, but King Rama II later moved them to halls in the Phra Maha Monthira group, with his coronation being held in one of them. The Phra Maha Monthira comprises three connecting buildings: the Chakrapat Biman Royal Residence, the Baisal Daksin Throne Hall and the Amarindra Vinijaya Mahaisuraya Biman Throne Hall.

The coronations of King Rama VII and King Rama IX were once again held in the Phra Maha Monthira group of halls.

The assumption of the Royal Residence is an important part of the coronation ceremony. It is customary for the newly crowned monarch to spend at least one night in hall, which is placed in the innermost part of the Grand Palace. 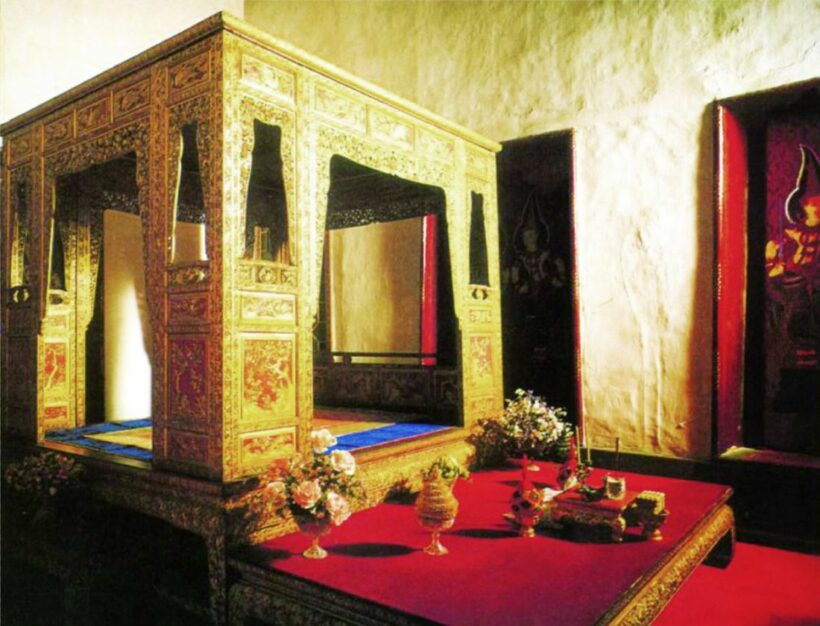 The king’s bedstead inside the Chakrapat Biman Royal Residence.

The hall was built during the reign of King Rama I as the primary apartment and sleeping quarters of the monarch. According to tradition, only crowned kings can sleep within this hall. Divided by a golden screen, the northern part of the hall contains a canopied bed originally occupied by King Rama I, and above it hangs a ninetiered umbrella. The second part of the room contains a dressing and privy chamber, above which hangs another ninetiered umbrella. King Rama VI spent the last years of his life in this hall, and passed away in 1925.

King Rama VII and King Rama IX, however, spent  a few nights in this hall after their coronation.

During the coronation ceremony, royal accessories were traditionally placed in the Chakrapat Biman Royal Residence for the monarch’s assumption of the residence. Among them were the “cat” or Wila, mortar stone, auspicious seeds, green gourd, golden key and a gold blossom of the betel palm. More objects were later added such as the whisk, which was later made from the tail of a white elephant.

The middle chamber, a rectangular hall, is where most important religious and state ceremonies are held, including the coronation. 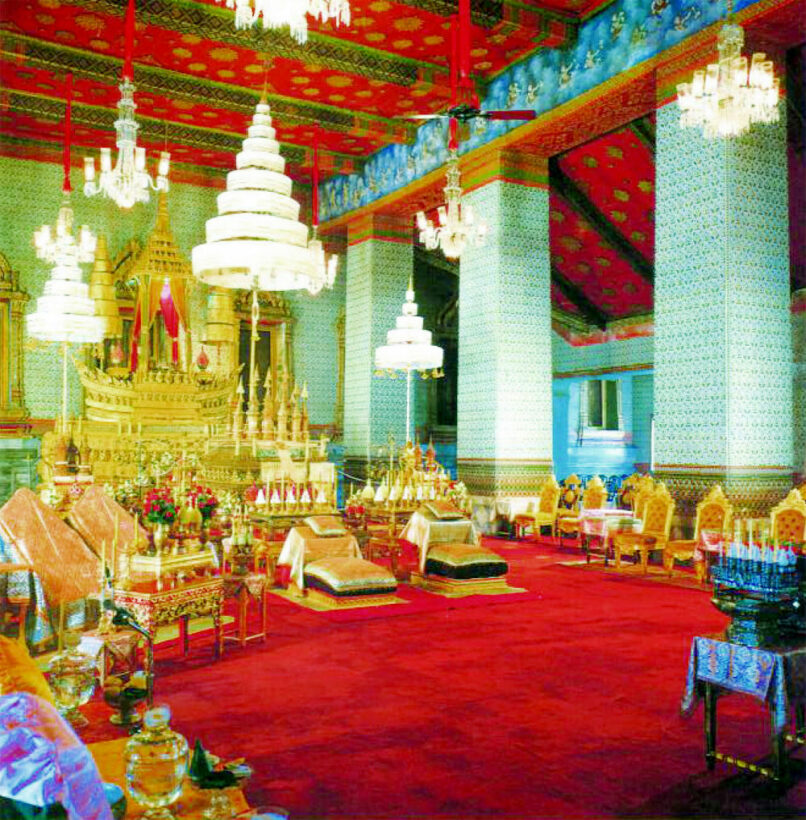 Inside the Baisal Daksin Throne Hall, where the Atha Disa Udumbara Raja Asana Throne is placed on the east and the Bhadrapitha Throne is on the west.

The hall houses two thrones: the Atha Disa Udumbara Raja Asana Throne or the Octagonal Throne situated in the eastern part of the hall, and the Bhadrapitha Throne on the western side.  On the northern side of the hall is a solid wall comprising 11 door panels, and in the centre of this wall is a Chinesestyle altar housing Phra Siam Devadhiraj – a deity who is believed to protect the country. The deity was crafted on the instruction of King Rama IV.

After the newly crowned king takes possession of the Royal Residence, the next ritual is for Buddhist monks to present a sermon to the new king at the Amarindra Vinijaya Throne Hall. This ceremony does not involve holy chants, but instead the Supreme Patriarch and a group of Phra Racha Khana monks are invited to preach to the new monarch, while seated on a special pedestal with a nine-tiered umbrella.

Thanathorn says other MPs now in the firing line, including from Phalang Pracharat