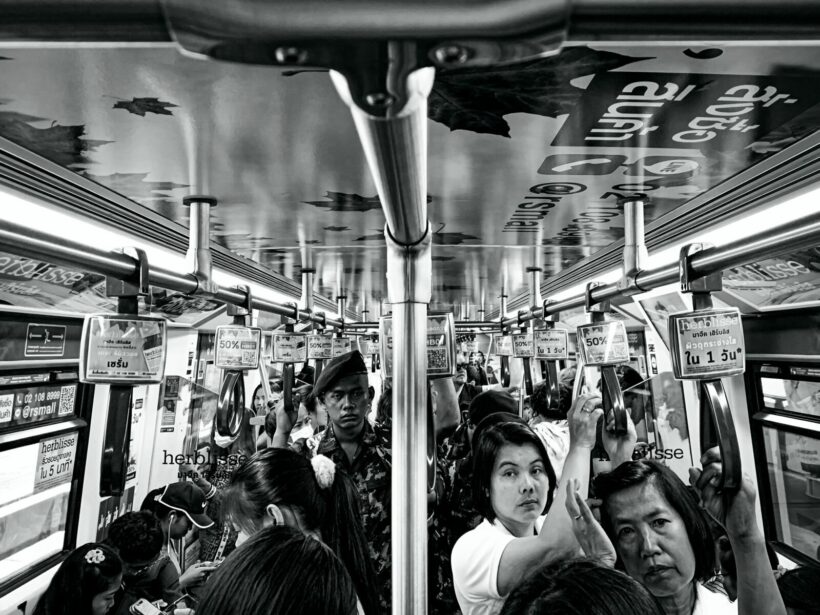 Sky Train (BTS)
The BTS has two lines, the Sukhumvit line, which goes from Khu Khot to Kheha. The Silom line goes from National Stadium to Bang Wa.

The green Sukhumvit Line can take you to many locations like Siam, Asok, Ekamai and Mochit. While the Silom Line takes you to MBK, Saladaeng, Wongwien Yai and the central business district of Chongnonsi.

The cost of a trip ranges from 16 to 59 baht, based on the number of stops you go through. You could also buy one-day unlimited-use tickets for 140 baht, or buy and top up a Rabbit card with stored value.

Metro (MRT)
Just like the BTS, the MRT also has two lines. The MRT also includes a number of interchanges with the BTS, allowing you to go to numerous locations around the city.

The blue-line subway runs from Bang Sue in the north to Hualamphong. The purple line goes between Tao Poon and Khlong Bang Phai stations and connects to the blue line at the Tao Poon interchange station.

The blue Line runs through the main stations that run through the city centre like Asoke (Sukumvit station), Silom, Hua Lamphong and Chatchuchak park.

Tickets is similar to that of the BTS. Fares range from 15 to 42 baht. The MRT operates from 6am to midnight, but stations start to close at 11:30pm.

Taxi
While taking the train is the best way to get around the city, there are times when taking a taxi is necessary. We advise you to download the app called Grab. Think of Uber but for the southeast Asian market. The app is very easy to use. Once it’s downloaded onto your phone, you can select the type of vehicle you want. Pin your current location and set where you’re ahead. You will see the price before you get into the car.

All taxis are required to have metres, but in some cases, they will claim that “it’s broken” or “metre no work.” If you have to take one of the colourful taxis instead of using Grab, don’t you worry. Just tell them you prefer to have the metre turned on, and if the driver resists, walk away.

Metres should start at 35 baht, and most rides won’t cost more than 200 baht. The price will vary if you’re travelling during rush hours or taking the freeway.

Motorbike Taxis
Motorbike or motorcycle taxis are popular among locals when they’re in a rush. You can find them at every street corner or somewhere in an alley, with their numbered orange vests. It’s usually very cheap to get from one end of the road to another.

Travel bubbles for foreign travel to be discussed on Wednesday

Most people rely on them since you can get to your destination fairly quickly at a very low cost. The rides tend to start at 20 baht from one end of the street to another. We recommend asking the price before hopping on. They do get more expensive the further you go, so for longer distances, it’s not ideal.

They also have a mixed reputation. It’s fair to say that it’s unsafe due to their reckless driving. Some riders will provide you with a helmet, but the cleanliness is questionable.

You can also book a ride on the Grab application.

Boat
Bangkok’s commuters are served by two boat options, one running along the Chao Phraya River and another via canals.

Canal taxi boats that travel along Khlong Saen Saep (from Banglamphu to Ramkhamhaeng) and are a convenient method to go between Banglamphu and Jim Thompson House, Siam, and other destinations farther east along Sukhumvit — following a mandatory boat change at Pratunam Pier.

The boats provide an alternative option for commuters and they only stop at the docks for a few seconds — hop on right away and you’ll be left by the dock. The fares range from 12 to 15 baht. Locals complain that the San Saeb Canal is filthy and unpleasant, but it is one of the quickest routes to get around.

The river is plied by a number of Chaophraya Express boats. The colour of the flags flying from the back of the boat defines which boat they represent.

Also, there are many cross riverboats that cruise every few times till late in the night and cost just 3 baht. Longtail boats for sightseeing tours may be arranged at Phra Athit/Banglamphu Pier, Chang Pier, Tien Pier and Oriental Pier.

Bus
If you do decide to use the bus, route maps in English can be found at most 7-Eleven outlets and bookstores. Air-conditioned bus rates range from 12 to 25 baht, while fan-cooled bus fares begin at 10B. With the exception of the ‘all-night’ buses, which operate from 3am or 4am to midmorning, many bus routes operate between 5am and 10pm or 11pm.

Travel Guide: To tip or not to tip when travelling in Thailand?

The bus is one of the most difficult mass transit systems for travelers to use in Bangkok, and it is a slow method to get somewhere. Most bus stops are in disrepair and have out-of-date posters and stickers on them.

Many buses still have operators, so once you’ve chosen a seat, you’ll need to pay for one. But, on selected lines, the Bangkok Mass Transit Authority already accepts credit or debit card payments.

Tuk Tuk
Last but not least is the famous tuk tuk. We understand that this is a must for most foreigners when visiting Thailand, so the rides are very expensive. Drivers can be pushy, but don’t give in. Try to keep calm, and negotiate the price.

It’s one of the scams here in Thailand, so considered yourself warned. If they ask you about wanting a tailored made suit, for example, it’s best to ignore it, unless you want to take your chances.

What’s your take?
If you’ve been to Bangkok, what’s the best way for you to get around? What has been your experience? If you haven’t been here before, what is the method of transportation you’re most likely to use? Let us know in the ThaigerTalk section below.

CamPat
Re: Taking the Bus. I add the Viabus App which shows all relevant Bus Lines incl. from Don Muang Airport to MoChit Bus Station with a life update of the whereabout of the Bus. It's dirt cheap and very efficient…