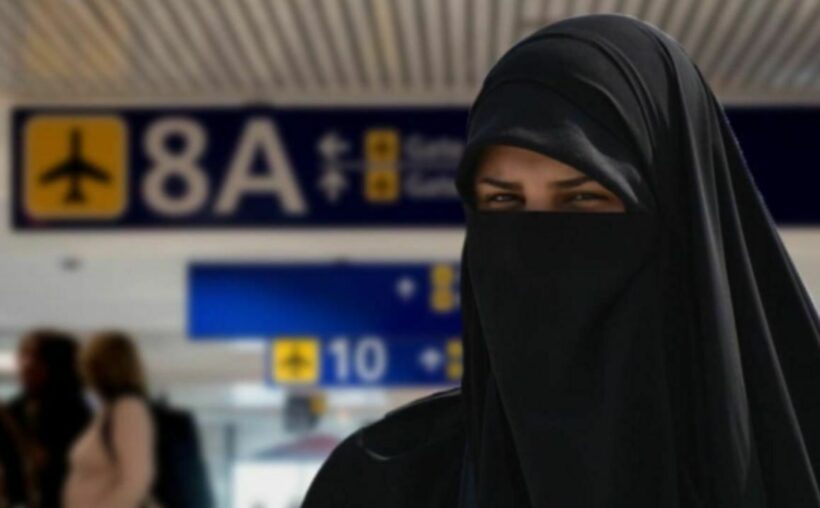 PHOTO: A man with Covid-19 sneaks onto a flight disguised in his wife's niqab. (via cage.ngo)

Stories have been going viral about how after lockdowns and travel restrictions, airlines are struggling with defiant and badly behaved passengers. But an Indonesian man who is infected with Covid-19 went to extreme measures to sneak aboard a flight this week disguised by dressing up as his Covid-19 negative wife.

The man who had tested positive for Covid-19 swapped identities with his wife who tested negative in order to board a domestic flight in Indonesia. He was able to use his wife’s passport and her negative PCR test results to clear security at Halim Perdana Kusuma Airport in Jakarta and board the plane and wasn’t detected until midway through the flight.

The man was able to board the flight disguised as his wife by wearing a niqab, a veil that some Muslim women wear that covers their entire face except their eyes. But apparently thinking he was already in the clear, partway through the flight, a flight attendant witnessed him walk into the bathroom as a woman, and come back out dressed in his normal male clothing.

The flight was a Citilink flight from Jakarta to Ternate, and the attendant contacted airport authorities in Ternate who were waiting to take the man into custody when the plane landed. Health officials onsite immediately tested the man for Covid-19 with a PCR test that returned a positive result.

The Ternate City Covid-19 Handling Task Force was then brought in wearing full PPE safety gear to take the man off the premises, escorting him to his house in the city via an ambulance escort. He has been commanded to self-isolate in his home, with observation by officers of the task force.

Local police have stated that the man disguised as his wife on the flight will face criminal charges after he finishes the mandatory self-isolation period.

Need an easier way to travel during Covid-19? For more information on how to get into Thailand during the pandemic, CLICK HERE.

gummy
1 minute ago, Dedinbed said: Yea but what about the Mandy , sorry Dick Emery's and Bombardier Gloria Beaumont's of the world .. how are they supposed to get about now ..  Another great comedian who would never be allowed…

Dedinbed
2 minutes ago, gummy said: Another great comedian who would never be allowed to perform now due to the pc brigade So true that is .. I used to love Dave Allen when he'd sit on the chair with smoke…

Bluesofa
1 hour ago, Dedinbed said: So true that is .. I used to love Dave Allen when he'd sit on the chair with smoke and drink on the go .. that alone now would get him banned and that's before…

Faraday
1 hour ago, Dedinbed said: So true that is .. I used to love Dave Allen when he'd sit on the chair with smoke and drink on the go .. that alone now would get him banned and that's before…