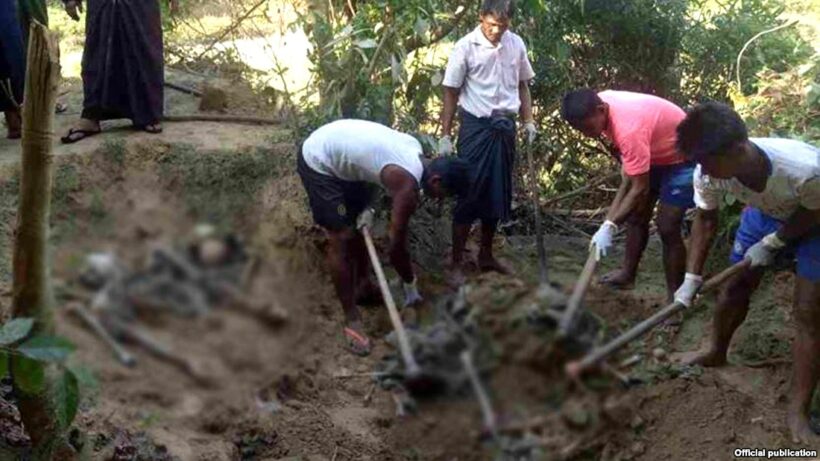 Reuters have released a report on ethnic killings in Myanmar, detailing research done by two of its reporters currently jailed in Myanmar.

The news agency details the slaughter of 10 Rohingya men in the village of Inn Din, where Reuters journalists Wa Lone and Kyaw Soe Oo spoke with Buddhist neighbors who reportedly admitted to killing the men and burying their bodies in a mass grave.

The report includes a photo of the 10 men kneeling with their hands tied behind their backs, reportedly on the same day they were killed. Another one shows the men’s bodies in a mass grave. Witnesses authenticated the photographs, according to Reuters.

“The Reuters investigation of the Inn Din massacre was what prompted Myanmar police authorities to arrest two of the news agency’s reporters,” the report said.

The two reporters are being tried under the Official Secrets Act – a British colonial-era, counterespionage law – for their investigative work with Reuters, the international news wire, on military operations in Rakhine state. Following militant attacks in August, the crackdown has driven close to 700,000 Rohingya Muslims into Bangladesh.

In a rare admission of guilt, Myanmar’s military said a month after the reporters’ arrests that its security forces were responsible for the deaths of 10 Rohingya found in the Inn Din mass grave.

The military continues to deny systematic killings of the Rohingya Muslim minority, which the United Nations has deemed ethnic cleansing.

Read more about the work of these two reporters HERE.

The man who uncovered the watch scandal