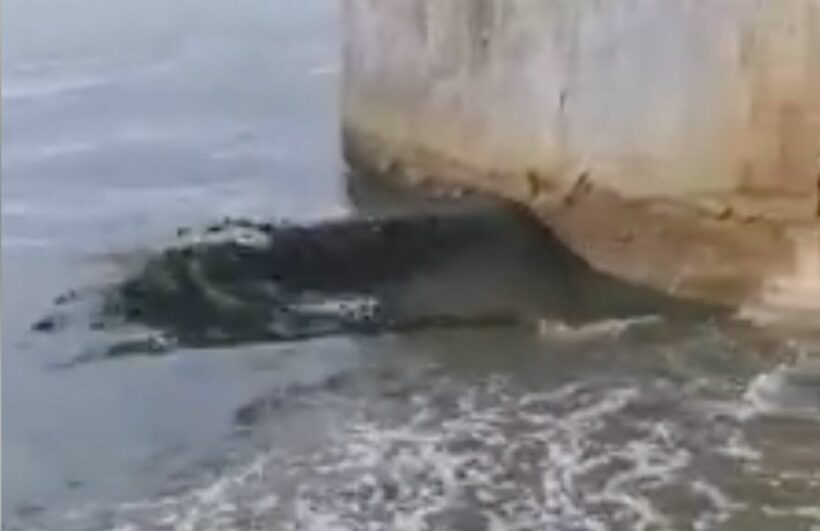 A heritage museum in Pattaya is blaming a “faulty pump” for the flow of black wastewater that was flowing into the coastline on the Pattaya beachfront at Wong Prachan Bay. The “Sanctuary of Truth Museum” VP denied that they’d intentionally allowed the dirty water onto the beach. But later the vice president of the Sanctuary of Truth, Warakorn Wiriyahan, added that the discharge seen in the Facebook post was “due to a problem with its wastewater treatment system”.

He added that heavy rains in Pattaya over the past week had “overwhelmed the system”.

“The water pumps installed to treat wastewater were faulty. That has now been fixed.”

The damning video was posted on Areerut Sinsupun’s Facebook account yesterday. It shows the black water flowing out of a drainage pipe onto the beach and into the sea.

The comments on the video were predictably savage and mostly urged the local Pattaya officials to do something about it.

“Been doing this for years”

Sanctuary of Truth Museum claims to house the world’s largest and most beautiful woodcarving. It appears to be less willing to share the ‘truth’.

Meanwhile, the Pattaya Municipality, in a rare moment of candor, shared the video on its own Facebook account. Comments mostly blamed the municipality for not checking the storm drains pumping ‘black water’ onto Pattaya’s beaches.

Magical ‘fixes’ are often claimed after these too-frequent videos appear on social media, until they re-occur, which is usually the case.